The facts of the Ukrainian scandal are utterly damning, but that won’t matter 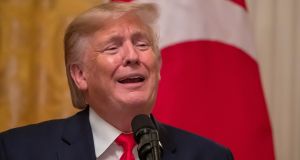 Bill Taylor is the interim head of the US embassy to the Ukraine and a key witness at the impeachment inquiry that began public hearings in Washington this week. In his original deposition there is moment of dizzying weirdness.

Taylor, in private hearings last month, was describing the consternation in the US diplomatic and security establishments last July when Donald Trump suddenly blocked military aid to the embattled Ukrainian regime. This assistance – training of soldiers and the provision of sophisticated communications equipment – had been very effective in helping Ukraine defend itself against Russian-backed secessionist forces.

The provision of this aid was official and apparently uncontroversial US policy, fully backed by both parties in Congress and apparently by every level of government. But a directive issued from Trump’s acting chief of staff, Mick Mulvaney on July 19th: suspend the aid. It created utter bewilderment.

According to Taylor, the National Security Council (NSC), which coordinates US security policy and overseas interventions, called “a series of interagency meetings,starting at the staff level and quickly reaching the level of Cabinet secretaries. At every meeting, the unanimous conclusion was that the security assistance should be resumed, the hold lifted.”

The secretaries of state and defence, the director of the CIA and the national security adviser then asked for a joint meeting with Trump to get him to explain the dramatic shift in policy.

And here’s where it gets really weird. According to Taylor, it proved impossible to schedule a meeting that all of these key figures could attend. Why? “I think”, said Taylor, “this was also about the time of the Greenland question, about purchasing Greenland, which took up a lot of energy in the NSC”.

When Taylor said this, Adam Schiff, the usually eloquent Democratic congressman who was chairing the deposition, seemed virtually speechless. The best he could manage was “Okay. That’s disturbing for a whole different reason.”

It sure is – not least because it raises the question of whether Trump’s presidency is so bizarre that it gives him a kind of immunity. Normal rules do not apply.

The “Greenland question” that the US government was so wrapped up with is one of those episodes in the Trump presidency that would be breathtaking in any other context. It flared up in August when Trump abruptly cancelled a state visit to Denmark because its prime minister, Mette Frederiksen, dismissed as “absurd” his demand that he be allowed to buy Greenland.

President Trump called this “nasty” and issued a stream of Tweets attacking the Danes. He described the purchase of an entire country as “Essentially ... a large real estate deal”. He tweeted a mock-up of a Greenland landscape with a huge Trump-branded tower block looming over it.

This behaviour was, to use the precise medical term, batshit crazy. In any other presidency, it would itself have provoked a political and perhaps even a constitutional crisis: is this man fit to hold office? Here – and this is where it relates to the Ukraine episode at the heart of the impeachment hearings – was a president conducting US relations with allied countries as a mafia shakedown: give me what I want (however absurd) or the US will not be your friend anymore.

But what happened? Essentially nothing. The “Greenland question” is pretty much forgotten already. Trump’s insane and bullying behaviour had no consequence. He has reason to believe that the same will be true of the similar shakedown he was attempting on the Ukrainian president, Volodymyr Zelenskiy, at the same time.

The truth as we know it so far, and as it will be further dramatised in the impeachment hearings, are overwhelmingly against Trump. A series of highly professional, independent public servants will testify to two interrelated facts.

It is striking that Donald Trump’s political and media defenders have instead concentrated on trying to paint those who will testify to them as partisan, unreliable and unpatriotic

One is that President Trump, through his personal lawyer Rudi Giuliani, his energy secretary Rick Perry, his special envoy Kurt Volker and his ambassador to the EU Gordon Sondland, operated what Taylor called “an irregular, informal channel of US policymaking with respect to Ukraine” – essentially a system of parallel government.

The other is that the prime purpose of this “informal channel” was to force the Ukrainian government to concoct a scandal that would smear Trump’s possible rival in the 2020 presidential election, Joe Biden, through his son Hunter, who was on the board of the Ukrainian energy company Burisma.

Trump also demanded, in a call of September 7th call to Sondland, that the president of Ukraine “go to a microphone and say he is opening investigations of Biden and 2016 election interference.”

So as well as smearing Biden, he also wanted to turn the vast Russian interference in 2016, detailed in the Mueller report, on its head: he was the victim of a (nonexistent) Ukrainian plot to favour Hillary Clinton.

It is striking that Donald Trump’s political and media defenders have not really questioned these facts but have instead concentrated on trying to paint those who will testify to them (including US Army Lieutenant Colonel Alexander Vindman, an NSC official who has a Purple Heart from the war in Iraq) as partisan, unreliable and unpatriotic.

But these slurs seem unlikely to alter the story that has already emerged. Unless there is some unforeseen and sensational development, it seems clear that there will be overwhelming evidence that the president undermined his own government’s foreign policy, attempted extortion against the head of an allied state and solicited interference by a foreign state in a US election – all, surely, “high crimes and misdemeanours” that demand his impeachment.

It is also striking that Trump’s behaviour in all of this worried some of those around him who had enough experience to spot danger. Taylor testified that National Security Advisor John Bolton abruptly ended a meeting with Ukrainian officials on July 10th after Sondland raised the demand for “investigations,” which “triggered Ambassador Bolton’s antenna, political antenna, and he said, ‘we don’t do politics here’.”

Likewise, Trump’s previously slavish attorney general William Barr, who did so much to protect his boss when the Mueller report was published in April, reportedly declined Trump’s demand that he call a press conference to say that Trump had broken no laws over Ukraine.

The old hands know that the president is in the deep stuff and don’t want to end up like previous casualties of Trump’s scandals like Paul Manafort and Michael Cohen, who are in prison, and Roger Stone, who is currently on trial.

But Trump doesn’t care about the damage to his minions. He knows that he himself will be cleared by the Republicans at an eventual trial in the Senate – unless there is a huge groundswell of public outrage across party lines.

And this is where Trump’s appallingly low standards seem likely to grant him immunity. His immune system has been boosted by the vaccine of regular outrages. He has perfected the art of offensive distraction: he can draw attention away from one scandal by generating another.

The impeachment hearings will be rough, but he will rely on the power of idiocy and insult : try to buy the Aran Islands, attack the Dalai Lama, start a trade dispute with Iceland, say nice things about Nazis. In Trumpworld, the weirder the next thing is, the less lurid the last thing seems.

1 Luke ‘Ming’ Flanagan bares his bottom half to European Parliament
2 Normal People: Full-frontal nudity was not its most radical feature
3 The subtle signs that point the way towards haemochromatosis
4 Gardaí investigate Dublin Black Lives Matter protest over Covid-19 rule breach
5 Trump turns to bible for photo op as DC burns around him
Real news has value SUBSCRIBE