Ireland needs to get ready for the 4th industrial revolution 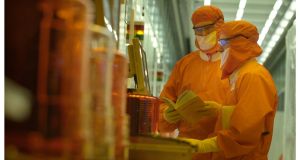 Technicians in a clean room at Intel’s manufacturing facility in Leixlip. The microprocessor manufacturer has invested $15 billion in Ireland since 1989

I first joined Intel in 1991 at a time when the Irish economy was emerging from the turbulent ‘80s and the green shoots of what would become an historical economic resurgence had begun to emerge. In Leixlip, my new place of work, the construction of Fab 10, Intel’s first manufacturing facility in Europe, had just begun.

Within a couple of years, Ireland and Fab 10 had stepped onto the leading edge of advanced manufacturing globally. From our small island on the edge of the Atlantic, millions of complex microprocessor devices were being manufactured, powering technology advances across the world. The story of Intel in Ireland would continue to evolve over the coming years and investment in three additional fabrication facilities followed. More recently, Intel in Ireland played an integral role in delivering Intel’s leading edge (14nm) technology to customers worldwide, bringing the total capital invested in Ireland since 1989 to a staggering $15 Billion.

Intel’s journey in Ireland has just reached an important milestone - 30 years of operations. During those years, one impressive characteristic of Ireland’s industrial base (both FDI and indigenous companies) has been the growing footprint of many globally focussed advanced manufacturing companies. Ireland’s strong industrial foundation and our skilled workforce continue to position us as one of the top locations in the world for advanced manufacturing to prosper.

Led by both maturing and emerging digital technologies, manufacturing is entering what has been coined the ‘4th Industrial Revolution’. This revolution promises to have a disruptive impact on every aspect of manufacturing, delivering breakthrough capabilities and efficiencies. Intel co-founder Andy Grove once said; ‘Not all problems have a technological answer, but when they do, that is the more lasting solution’.

In a world where demand is growing for mass customisation with ‘instant’ delivery, there is real opportunity for Ireland to enhance the capabilities of our manufacturing sector by adopting a strategic approach that focuses on people, new technologies and industrial processes. Strong advanced manufacturing activity is a key engine for innovation and for academic partnerships. The CSO have estimated that manufacturing companies were responsible for over €1.2 billion of spending on research and development activities which was almost half of the spending in this area last year alone. Crucially, advanced manufacturing also goes hand in hand with environmental sustainability as an enabler of efficiency, cost reduction and the delivery of innovative products that create significant value for customers, employees and the wider community. At Intel, since 2016, 100per cent of all electricity supplied to our Leixlip campus is generated from certified indigenous renewable sources, making us one of the largest voluntary, private purchasers of renewable energy in Ireland.

For Ireland to remain competitive globally in the 4th Industrial Revolution, we must respond accordingly but this will require a renewed, strategic focus reflecting the criticality of our advanced manufacturing capability. Back in 1989, nobody could have imagined that the campus that Intel was creating in Leixlip would become one of the most technologically advanced of any kind in the world. Nobody could have imagined that right here in Ireland we would be producing the most complex devices ever manufactured. Today, as I reflect on 30 years of Intel in Ireland, I am proud of these achievements but equally, I am excited to think about what might be possible in the next 30 years, not just for Intel, but for the many companies across Ireland who are making their mark on the global manufacturing stage.

Eamonn Sinnott is Intel Vice President, Manufacturing and Operations and

1 Coronavirus: Cabinet considers scrapping 20km limit and allowing some pubs to reopen
2 California police fatally shoot 22-year-old man on knees with hands up
3 ‘Get the eff out of this country’: Irish racism, as heard on Liveline
4 Covid-19: Wage subsidy and unemployment payment extended to end of summer
5 Donald Trump is in trouble, and that could spell very bad news
Real news has value SUBSCRIBE