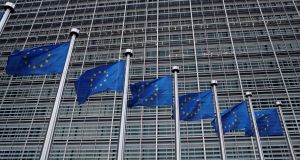 Throughout the Brexit process, Britain has tried to split the other 27 EU member states. But it has failed. Much to the surprise of the authorities in London (and probably Brussels, too), the European Union has lived up to its name - and stayed united.

This display of unity over Brexit is not an accident or a one-off. On the contrary, it says something important about why the European project is much more resilient than its critics realised. The 27 small and medium-sized nations that make up the EU have a powerful shared interest in protecting the European single market.

That strategic imperative is only going to become more pronounced in a world shaped by two superpowers - the US and China. Both Washington and Beijing are increasingly using trade and investment as a political weapon. As individual nations, the EU27 know they can be picked off by the superpowers. But, as the world’s largest cross-border market, the EU knows that is has comparable weight to China and America and can push back.

If America decides to impose car tariffs on European producers in the coming months, the EU can respond with measures imposing comparable pain on the US. The EU is also taking unified action against China’s forced transfer of technology. And it has responded to Russia’s annexation of Crimea by imposing sanctions that cover the whole of the EU single market.

There is no doubt that there are deep divisions within the EU. Poland is being sued by the European Commission for straying from democratic principles. The Italians and the French are feuding over budgets and borders. The Hungarians and Germans are at loggerheads over refugees. Greece was almost thrown out of the euro.

But the internal divisions pulling the EU27 apart are less powerful than the external pressures pushing them together. This simple point is sometimes missed, even in Brussels, because the EU likes to call itself a union of “values”. However, the idea that EU leaders are united by shared values is increasingly hard to maintain. Viktor Orban, the prime minister of Hungary, and Matteo Salvini, the deputy prime minister of Italy, have a lot more in common with Donald Trump in the US (or even Vladimir Putin in Russia) than with Emmanuel Macron or Angela Merkel, the French and German leaders.

The Italian, Hungarian and Polish governments are also fond of the anti-Brussels rhetoric favoured by Britain’s Eurosceptics. But that does not mean they will diverge from the Brussels line in the Brexit negotiations. They understand that their economic and strategic interests are much better served by sticking with the EU27.

In that sense, the EU looks increasingly like an alliance built on shared interests than a union of values. Talk of alliances tends to cause shudders in Brussels because it is redolent of warfare in Europe. But in the 21st century, European countries have a clear interest in allying with each other, rather than against each other, as in the past.

Thinking of the EU as an alliance also clarifies another vexed question - the loose talk of a “ European army”. The formation of such an army is unlikely because the EU is not a unitary state. But a close military alliance, perhaps with a mutual defence clause, does look feasible.

China, in particular, is expert at breaking the unity of an alliance by offering inducements to the weakest link.

Until the advent of the Trump administration, talk of an EU military alliance would have seemed either redundant or dangerous - since it might undercut Nato. But Mr Trump’s apparent questioning of US membership of Nato makes it only prudent for Europeans to think harder about making their own security arrangements.

The EU is still a long way from being a military superpower and may never get there. But it is already a global player in trade and business regulation. That is important because, in the nuclear age, superpowers are more likely to struggle with each other by economic rather than military means. The European Commission is already at the forefront of challenging the monopoly power of big Silicon Valley companies such as Apple, Amazon, Facebook and Google. And the commission is now also looking at new ways of policing Chinese corporate takeovers in Europe.

However, China, in particular, is expert at breaking the unity of an alliance by offering inducements to the weakest link. That strategy is on display in Beijing’s Belt and Road Initiative, which seems set to offer particularly juicy projects to smaller EU states in eastern Europe. They might then be persuaded to vote against EU policies getting tougher on China.

But the EU will survive the occasional division over policy towards China or the US. The fact is that the package of benefits that the EU provides can never be replicated by the US or China.

The European single market offers proximity, size, legal certainty, freedom of movement of people and a vote on new laws and regulations. That is why countries such as Poland and Hungary - which love to complain about Brussels - are highly unlikely to risk leaving the EU.

There are some in Warsaw who predict that Poland will, in fact, walk out of the EU the moment that generous EU payments to Poland cease. But the reality is that even net contributors to the EU budget lose a lot if they leave. Just ask Brexit Britain. - Copyright The Financial Times Limited 2019