October 26th, 2018: Speaking in the House of Lords, Lord Sugar has said that Boris Johnson and Michael Gove should be imprisoned for the "the £350 million lie they put on the red bus" during the Brexit referendum. Video: UK Parliament TV 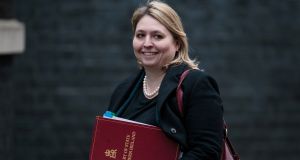 Northern Secretary Karen Bradley, who said: “I didn’t understand things like when elections are fought, for example, in Northern Ireland – people who are nationalists don’t vote for unionist parties and vice versa.” Photograph: Jack Taylor/Getty Images

When future historians try to understand how Britain ended up with a choice between chaos and becoming a satellite of the European Union, one question will stump them. Were these people telling deliberate lies or were they merely staggeringly ignorant? Where does mendacity stop and idiocy begin? Historians generally have to assume that people in power have a basic grasp of what they are doing, that their actions are intentional. They may use deception as a tactic and they may be deluded in what they think they can achieve. But they must, at least at the beginning, have some grasp on reality – otherwise they would not have achieved power. Yet, for the poor historians trying to make sense of Brexit, this assumption will be mistaken.

There is, of course, plenty of straightforward mendacity for them to identify. Boris Johnson’s whole journalistic and political career has been driven by his talent for taking minor regulations and distorting them into wildly exaggerated claims of oppression by the Eurocrats. This can’t be done by mistake. For example, you cannot by accident take, as Johnson did, a Council of Europe (not EU) convention on the repatriation of corpses and turn it into a repeated claim that “There really is European legislation on the weight, dimensions and composition of a coffin”. There isn’t. This is not ignorance – it is a knowing falsification of the truth. So let’s leave that aside. Historians will know it when they see it.

Their problem will be, rather, with the shades of obliviousness. Here our future scholars will have to try to distinguish between three kinds of ignorance: deliberate unknowing, crass self-delusion and what we can only call pig ignorance. So, for their benefit, here is a brief spotter’s guide.

Deliberate unknowing is when you are fully aware of something but then choose to suppress that consciousness. A good example is Theresa May speaking about the Irish border on June 21st 2016, just two days before the referendum: “Just think about it. If we are out of the European Union with tariffs on exporting goods into the EU, there’d have to be something to recognise that, between Northern Ireland and the Republic of Ireland. And if you pulled out of the EU and came out of free movement, then how could you have a situation where there was an open border with a country that was in the EU and has access to free movement?” So she knew full well that a Brexit that involved leaving the customs union would create a hard border. And then, as prime minister, she insisted on the opposite: that a hard Brexit was perfectly compatible with no return of a hard border. She unknew what she had known.

Crass self-delusion is when you start with an ideological premise that you believe to be true even though it isn’t and then draw apparently reasonable conclusions from it.

Thus, for example, David Davis sincerely believed the EU is just a front for German domination of Europe. Hence he also believed quite genuinely that the Brexit negotiations would be conducted not with Brussels but over a convivial weissbräu and schnitzel in Berlin and that frictionless trade would be decreed immediately because the German car manufacturers wished it so: sincerely fatuous self-delusion.

And then there’s pig ignorance – the genuine hallmarked, unadulterated, slack-jawed, open-mouthed, village idiot variety in which the people who are in charge of the British state don’t know stuff that anyone off Gogglebox could tell them. The Brexiteer MP Nadine Dorries admitted in effect that she didn’t know what a customs union is. Her comrade Andrew Bridgen said last month: “As an English person, I do have the right to go over to Ireland and I believe that I can ask for a passport. Can’t I?”

And last week the actual Brexit secretary, Dominic Raab: “I hadn’t quite understood the full extent of this, but if you look at the UK and look at how we trade in goods, we are particularly reliant on the Dover-Calais crossing.”

Historians will in time get to the bottom of the deliberate unknowing and the crass self-delusion. They can be charted. But this pure pig ignorance, innocent and unalloyed, is unfathomable. It will be impossible not to conclude that it was all part of some great strategic plan, that, if only we could plumb its depths, we could reveal the hidden truth of Brexit. How will they ever believe that the hidden truth is so asinine?