Fintan O'Toole: Why Caligula should be Theresa May's role model 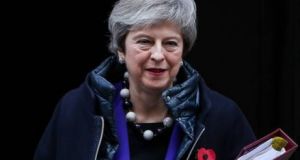 Theresa May: it is crucially important that she is allowed her Dunkirk moment. Photograph: Getty Images

It is probably not a good sign that the best role model for Theresa May as she approaches Brexit’s make-or-break moment is Caligula. The most notorious of Roman emperors needed a military triumph to bolster his faltering authority. He gathered legions and supplies, the historian Suetonius tells us, “on an unprecedented scale” and led them towards the French coast facing the English Channel.

He wrote despatches berating the people of Rome for enjoying themselves while he was facing all the hazards and hardships of war. He staged a few harmless skirmishes in Gaul, after which he awarded himself and his sidekicks victory crowns decorated with the sun, moon and stars. Finally, he got to the Channel, ready, it seemed, to embark on an invasion of Britain.

Suetonius tells us that Caligula then drew up his army and his great siege machines in battle array on the shoreline. “No one had the least notion what was on his mind when, suddenly, he gave the order ‘gather seashells!’ He referred to the shells as ‘plunder from the ocean’…and made the troops fill their helmets and tunic-laps with them”.

He then wrote to Rome with orders to “prepare a triumph more lavish than any hitherto known”. This incident is generally taken as evidence of Caligula’s “brainsickness” and perhaps it is. But the world would be a better place if all glory-hunting megalomaniacs instructed their soldiers, instead of carrying out futile massacres, to collect shells on the beach.

And I can’t help thinking that this story is quite instructive in relation to Brexit. Brexit is also a strange kind of mock fight, intended to make a point about British greatness rather than to achieve some real benefit.

We have had the phoney, melodramatic skirmishes, and the whole Brexit army is now lined up in battle array on the shoreline with nowhere left to go. It is time for Theresa May to take the Caligula option: gather whatever seashells can be rescued from the debacle, claim them as tribute from Michel Barnier, award all the leading Brexiteers victory crowns decorated with the sun, moon and stars, and declare a triumph more lavish than any hitherto known.

We must never forget how important it is for Britain to save face. National honour is no less potent for being idiotic. For example: what would have happened if the EU had said to the UK in 2015 when David Cameron was demanding concessions – Out! You’re expelled! We’re sick of all your moaning – just go!? Oh yeah, you and whose army? How very dare you talk to us like that? Staying in just to spite the damn Europeans would have become a great patriotic cause.

That didn’t happen, of course, and we are left with the need for May to perform that trickiest of manoeuvres: saving face while climbing down.

Since there is no possible outcome better than the status quo, Brexit was always going to go one of two ways. One was the insane self-sabotage of no deal. The other was a messy and profoundly unsatisfactory compromise. It was a choice between irreparable damage or reluctant damage limitation. The sane choice is still pretty grim, and it has taken almost a year for May to face up to its inevitability.

Since last December we have had what might be called the withdrawal agreement for slow learners. It was completely obvious to anyone who read the agreement without red-white-and-blue tinted spectacles what it meant: in order to avoid both a hard border in Ireland and a “border in the Irish Sea” the UK as a whole will have to stay in the customs union. That’s what May signed up to – and so did her government, including Boris Johnson and David Davis.

And it is a miserably anti-climactic ending to what was supposed to be an epic of national liberation: the UK will remain tied to the EU for a “temporary” period that will end on the Twelfth of Never.

Caligula himself would have known the line from Horace: Parturient montes, nascetur ridiculus mus. The mountains labour and give birth to a ridiculous mouse. The people who were promised a glorious Brexit are entitled to ask: Is that it?

And yet it is in everyone’s interest to declare the mouse a lion, and to hail May as a negotiating genius who has forced the EU – and the uppity Irish – into submission.

The British are still going on about Dunkirk – a retreat reimagined as a glorious victory. It is crucially important that May is allowed her Dunkirk moment

Ireland is going to get what it wants and needs: no hard border and, in effect, the softest available Brexit.

The British will get, in return, a declaration that if it can solve the Irish problem it can have its Canada-style trade deal – which is like saying that May can win Strictly as soon as she learns to dance.

But we must button our lips and look glum. The British are still going on about Dunkirk – a retreat reimagined as a glorious victory. It is crucially important that May is allowed her Dunkirk moment.

And to do that she must be allowed to talk up her success in getting all the great things that will follow if the Irish problem is ever solved. Don’t say: good luck with that. Do say: oh, what lovely seashells!