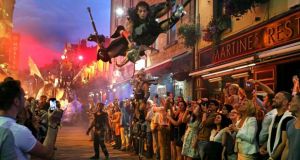 Fintan O’Toole: ‘The pandemic will have huge effects on what we will be reading and seeing and listening to decades from now.’ File photograph: Joe O’Shaughnessy/The Irish Times

I like to imagine that in a parallel universe, there is a discreet brass plate on the door of a fine Georgian house in Dublin, perhaps in Merrion Square or Leeson Street. It says simply “JG Farrell and Associates, Solicitors”.

The founder of the firm is retired now, but he is well remembered, not just for his prosperous practice, specialising in property deals, but for his long involvement in Leinster rugby circles. His granddaughters run the firm and his son is a High Court judge.

This was, after all, the life that JG Farrell, arguably the finest historical novelist in the English language in the second half of the 20century, had planned for himself. In 1956, Farrell was a student at Brasenose College, Oxford. He was reading law, with the idea of eventually becoming “an eminent Dublin solicitor or barrister”.

There were budding writers at his college – Ferdinand Mount, Paul Foot, Ved Mehta, Dennis Potter – but none of them knew Farrell because he was merely a jock and had no interest in literature. He weighed in at 14 stone and, as he later recalled, “Rugger was pretty well my life”.

He was a dashing centre and a fine place-kicker and he seemed sure to get an Oxford blue before taking a respectable degree and decamping to Dublin to begin his legal career.

Then, in November 1956, Farrell played an uncharacteristically poor game. He felt unwell in the dressing room, skipped the usual post-match piss-up and went straight to bed. His symptoms were like those of a bad flu. But what he had was a different virus: polio. He was the victim of an epidemic that caused terror around the world until a vaccine brought it under control.

Farrell spent months in the hell of an iron lung. His body shrank and his life as he knew it vanished. But he began to read dark novels that chimed with the arbitrary overthrow of his assumptions – books like Samuel Beckett’s Malone Dies. He started to write, eventually drawing on his own Anglo-Irish and Raj backgrounds to create his astonishing end-of-empire trilogy, Troubles, The Siege of Krishnapur and The Singapore Grip (currently being screened in an adaptation for ITV).

I was thinking about Farrell and his alternative life as a Dublin solicitor while trying to imagine how the current pandemic will affect art. We know the short-term effects, which are catastrophic for every form of performance-based creativity. But can we even begin to think of what the longer-term results might be?

Farrell’s experience tells us that there is a kind of chaos theory at work here. A tiny virus emerges thousands of miles away and one of its billions of consequences is a great trilogy of novels exploring, with a mordantly pitiless sense of the absurd, the decline and fall of an empire, written as if Tolstoy and Beckett were working as a tag team.

The relationship between cause and effect exists, but it is filtered through an impossible maze of accident, contingency, randomness.

In other words: the pandemic will have huge effects on what we will be reading and seeing and listening to decades from now – but most of them will be lost in the fog of chaos. The thread that links the great novel of 2035 to our current upheaval will be there, yet it may also be impossible to follow.

We bring our emotions and fears and hope and grief to bear on all the art we encounter. We’ll be doing this for a long time to come

We do know two things, though. One is that illnesses form artists – especially, perhaps, writers. They knock people out of their ordinary paths and make them see the world differently. Think of Hilary Mantel, along with Farrell one of only four writers to have won the Booker Prize twice, and the pain she has suffered from endometriosis since childhood.

Or of Maggie O’Farrell, who has just won the Women’s Prize for Fiction for Hamnet. O’Farrell has spoken of the impossibility of untangling her development as a writer from the two years she spent in bed as a child with viral encephalitis.

Anna Burns, who won the Booker in 2018 for the dazzling Milkman, lives with chronic pain.

Think of Marcel Proust, his life shaped by chronic asthma, writing À la Recherche du Temps Perdu in the cork-lined bedroom of his apartment on the Boulevard Haussmann. Or of all the great consumptives: John Keats, Katherine Mansfield, George Orwell, Franz Kafka, Anton Chekhov, Frédéric Chopin, Amedeo Modigliani. Think of the way TB leaves its mark on Edvard Munch’s The Sick Chamber, on Thomas Mann’s The Magic Mountain, on Sean O’Casey’s The Plough and the Stars, on Keats’s Ode to a Nightingale.

The point is not that the grief of mass infection is somehow worth it if it produces great art. Asked whether she would rather have her novels or her health, Mantel replied, “I think I’d choose the health.”

Given a choice, I would rather not have Farrell’s great trilogy if the polio vaccine had become available earlier and meant that kids I went to school with did not have to wear calipers on their legs.

But, as Covid-19 has reminded us, we do not have these choices. What we have instead is the need to tell stories and make images and create meanings and find consolation – and this will happen with the current pandemic as well. The very thing that causes such danger and distress – the disease – also sharpens these needs. Plagues (as artists have long noted) act in the same way that art itself does: they heighten perception, shake us out of our habits of mind, make the strange familiar and the familiar strange.

And this is the other thing we can be sure of. Our ways of seeing are already altered by the virus. We all experience this as we watch films or TV shows and find ourselves appalled by the crowded parties and casual mingling.

I experienced it in a particularly surreal way at the Galway International Arts Festival. The three excellent art exhibitions (today, by the way is the last chance to see them) were all conceived before the pandemic. But look at Nosferatu lurking in the shipwreck in Hughie O’Donoghue’s Night Cargo paintings – he’s the virus, isn’t he?

Look at the hauntingly beautiful way the three female figures move in and out of the light in Bill Viola’s intensely moving Three Women – it is surely about mourning and consolation in a time of mass death. Look at the strange choreographed figures on the big screen of John Gerrard’s Mirror Pavilion on the quays – an obvious mediation on the strange new ways we have learned to move in space.

Except, of course not. This is just what we do. We bring our emotions and fears and hope and grief to bear on all the art we encounter. We’ll be doing this for a long time to come. This thing we’ve been through – and we will be through it eventually – will be a Mirror Pavilion reflecting back to us the selves that have been subtly or dramatically transformed by this experience.

We just have to be sure that the artists and performers can go on making the images through which we can encounter those reflections.

1 Gardaí believe men in Cork murder-suicide chose to let woman survive
2 James Bond actor Sean Connery dies aged 90
3 ‘In Crete I pay 70% of what I paid for a shoebox apartment in Dublin’s docklands’
4 Richard Ford: America could fail. I have never felt this way before
5 Supermarkets compared: How Dunnes, Lidl, Tesco and M&S measure up
Real news has value SUBSCRIBE