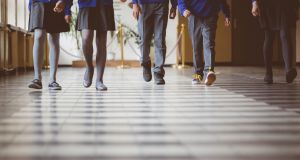 Many primary and some secondary schools have updated uniform policies to incorporate a choice of trousers, but a surprising number rigidly stick with skirts-only. Photograph: iStock

Imagine, as you go about daily life, being needlessly obliged to wear uncomfortable, impractical clothes that constrain your activity more than the boy next door. In a weird hangover from times when girls’ and women’s lives were more proscribed by notions of appropriate “femininity”, a sizable proportion of girls – and amazingly, mixed – schools still force female students to wear uniform skirts, without the option of trousers. It seems an incredible, everyday unfairness that we have internalised as acceptable in 2020.

Many primary and some secondary schools have updated uniform policies to incorporate a choice of trousers, but a surprising number rigidly stick with skirts-only.

A recent Irish Times article touched a nerve; many readers commented or got in touch, annoyed, frustrated, mystified, scathing; some marvelled that this is still a thing in 2020.

A mother wrote of twice raising the issue at her daughter’s school, always getting “pushback”. She’s “quite cheesed off by the situation but as daughter is in her final year not going to battle on it”. A teacher was affronted on her students’ behalf: “The girls are furious about this”, but “the principal is steadfast in opposition, and there hasn’t been much dialogue about it. Several girls say they don’t cycle to school because they don’t want their skirts blowing up”.

A very recent student reflected that her uniform made already awkward teenage years a bit more so: “A physically uncomfortable uniform is a minor inconvenience in the grand scheme of things, but what got to me was the school authorities didn’t seem to care that it was uncomfortable and impractical: that their idea of what girls should be wearing, what the girls traditionally had worn, was considered more important than what they felt comfortable in, and what would be practical for movement and temperature.”

It’s hard to argue against trousers as an equality issue. Compulsory skirts impede physical activity, are colder in winter, mitigate against cycling (the figures are stark: a tenth of teens cycling to school are female). Plus, obligatory skirts impose a layer of physical modesty on girls that boys simply don’t have to consider, which seems anachronistic in 2020.

While uniforms in general may be a form of social control, they are also a great leveller, eliminating peer pressure around clothing. They’re also an identifier, and can be a source of school pride. But inexplicably some school principals and boards of management seem to equate the pluses of a uniform with antiquated notions of femaleness that impede free movement, and risk involuntary flashing of underwear.

Compulsory skirts may be discriminatory under equality legislation, but no case has yet been taken to enforce it.

Just because students aren’t loudly clamouring for trousers does not mean they don’t want the choice, when asked (or that they aren’t moaning silently about it). Sometimes people – school principals and boards of management – need to lead, for the sake of fairness. And because it’s the right thing to do.

Being allowed to wear a tracksuit or leggings by special request, or having to change from a tracksuit on arrival at school, sounds like forcing a student to draw attention to themselves the last thing a teenager wants – and is an unwarranted imposition on girls.

Some schools say they offered a trousers option in a distant past, which wasn’t taken up, but anecdotally they were frequently ugly, badly cut, of uncomfortable material: “deliberately awful to deter us from making the switch”.

The key to getting trousers right seems to be very wide consultation, with students, parents, staff, uniform suppliers. If the aim is for trousers that students will actually wear, rather than a tick-box exercise without management enthusiasm, then buy-in requires student involvement.

We’re all conservative when it comes to change, and none more so than teenagers, who are strangled by peer opinion

Trousers should be well cut, with pockets – ideally zipped! – taking female bodies’ varying shapes/sizes into account, and with an awareness of teen body consciousness.

Cost may be an impediment. Girls are often already discriminated against, having to buy skirts from uniform suppliers, where boys’ trousers are off-the-shelf. If you’ve already shelled out for a skirt, trousers are an additional expense – and this delays uptake.

Some schools may fear a loss of discipline, status or image if they deviate from long established uniform rules (arguably there’s snobbery at play). But obliging teenagers to wear clothes that are impractical and uncomfortable and enforce a modesty, decorative “femininity” and body consciousness on girls, reinforcing traditional gender roles, is surely not the image many schools want to project. For schools that have offered trousers, school status was not tarnished (probably enhanced for many). The sky did not fall in.

We’re all conservative when it comes to change, and none more so than teenagers, who are strangled by peer opinion. The pressure from society’s disturbing obsession with, and judgment of, female appearance adds another layer.

It takes time to change social norms embedded over many decades. Girls not wearing trousers can be a self-fulfilling prophesy: if very few students wear trousers, it’s seen as “weird”, and teenagers do not want to stand out. If you can’t see it you can’t be it – so it takes a while before wearing trousers in school is normalised.

But do it right, and they will come. And it will liberate.