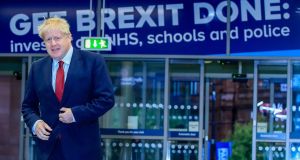 The best way to rouse drowsy delegates at the Tory conference is to declare, “Get Brexit done”. It is this year’s guaranteed applause line. No matter how clunking the speech or how flat the joke, uttering it gets the members clapping. In the bars and the receptions, it’s the same story – the phrase has people raising their glasses and cheering approval.

The message is simple and repetitive: back Boris Johnson to get Brexit done and allow the country to move on and talk about something else. Normally, a party comes up with a slogan for its conference and then focus groups it. But there was no need to do that with this slogan: it came out of focus groups. No 10 and HQ were struck by how often voters said it in these groups, which Dominic Cummings sets such store by, and so decided to adopt it as their own.

Only no one seems quite sure how or when they are going to get Brexit done. Johnson has promised to take the UK out of the EU by October 31st “do or die” – he has repeatedly said “extension means extinction” for the Tories. But with parliament passing legislation to try to force him to seek an extension and opposition MPs refusing him an election until that extension is secured, senior Conservatives are starting to contemplate a world in which Brexit isn’t done at the end of October.

And so talk at conference has turned to how the party could wear an extension in a general election – and who could be made to carry the blame.

Some had hoped that this predicament wouldn’t arise because there would be a deal with the European Union. However, ministers and MPs now see agreeing a deal with the EU in the next week as unlikely. “I give it a one in three chance,” says a government minister keen for a Brexit deal.

Even Johnson, normally the biggest optimist in the room, is viewed to be relatively downbeat about the chances by members of his cabinet – with the prime minister playing down the chances of a deal during a cabinet conference call last week.

Not all Tory MPs want a deal right now, though. A number of Conservative MPs who represent Brexit-backing seats that they won from Labour in 2017 worry that an attempt to pass a Brexit deal in the next few weeks could backfire for them at the ballot box. Tory MPs believe that recent rhetoric from No 10 about the Benn bill being the “surrender bill” has cut through with leave voters and the threat of the Brexit party appears to be decreasing as voters increasingly identify Johnson as the champion of leave.

Why risk that with a Brexit compromise? If Johnson won a time limit on the backstop, it would be a tough sell to get it through parliament. Recent incidents in the chamber – namely Johnson replying “humbug” to Paula Sherriff’s call for calmer language out of respect to the memory of Jo Cox – mean that there’s little goodwill between the Tories and Labour MPs, who will find it hard to help Johnson out, even if they wanted Brexit done for their own constituents.

The Tory worry is that Johnson will go all out to sell a small change to the Withdrawal Agreement as a big win and then fail to get it through parliament. “We’d go into the election with Nigel Farage able to say we were no better than Theresa May and her withdrawal agreement,” one MP in a leave seat says. “He could cry Brexit betrayal.” Meanwhile with Brexit “done”, Labour leavers would have little reason to vote for the Tories. If Brexit had already happened, there would be no need to vote Tory to make it happen.

Many MPs hope Johnson’s manoeuvering will be enough to simply ensure the UK leaves on October 31st, deal or no deal. At that point, MPs would likely bring the government down and an election would follow in which Johnson had made good on his promise.

Despite this prevailing mood, some senior government figures urge caution. While a handful of No 10 aides – headed by Cummings – have suggested they have a way around the bill , which would means Johnson would be able to refuse to request and article 50 extension and not be in breach of the law. The apparent loophole is reportedly known only to Johnson’s inner circle. However, few believe that it is a 100 per cent reliable route. Instead, it’s about the narrative and the fight.

Cummings has told colleagues that he expects the last two weeks of October to be spent in the courts. Whatever trick Johnson’s senior aides have up their sleeve, expect it to be contested – and Johnson to potentially be defeated in court again.

“It’s about showing that we have done everything possible to try to meet that deadline,” says one government aide. “Hopefully it will work but if it doesn’t the public will know it was the Tories who were the ones trying to make it happen.”

Were the courts to legally force Johnson to request an extension, he would be faced with a choice: request or resign. Within No 10 there is mixed opinion on the pros and cons of resigning – Johnson is personally against the idea. What they agree on is that however they play it, any extension will not be their fault.

If it’s ordered by the courts, blame could be pointed at judges rather than ministers. One source of encouragement is recent focus groups where attendees spoke about the courts getting involved with politics. Attendees saw judges as part of a more general theme of everyone trying to stop Brexit – and identified Johnson as the person trying to deliver it.

Another source of hope has been found in a Nigel Farage tweet. When the supreme court ruling came through and found Boris Johnson’s prorogation of parliament unlawful, Farage took to social media to call on Johnson to resign “as a matter of honour”. The bulk of replies from Brexit supporters said that they usually agreed with Farage but on this he was wrong – Johnson ought not to resign as it would play into the hands of remainers. This is taken as a sign that Johnson’s positioning as the ultimate Brexiteer is landing.

An election after an extension has been agreed would no doubt be difficult for the Tories. It would risk disillusioned Brexit voters moving to Farage’s party – and leave voters concluding that Johnson was ineffective. But increasingly, Tories believe that if push comes to shove, they could wear it if they had to.