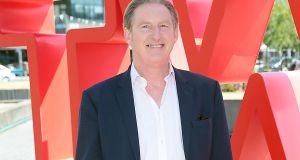 Adrian Dunbar: his character’s sayings in Line of Duty have become known as Tedisms, such as “I didn’t float up the Lagan in a bubble”. Photograph: Brian McEvoy

Colloquialisms and old sayings turn up in unlikely places just when you thought they had disappeared completely. Several resurfaced in the television drama Line of Duty, featuring the Fermanagh actor Adrian Dunbar, and included “I didn’t float up the Lagan in a bubble”. This confused some English critics and viewers who thought he had said “lagoon”, rather than the name of the river flowing through Belfast. The literal translation of the phrase is “I’m not stupid”.

Dunbar plays the part of Supt Ted Hastings, the head of an anti-corruption unit whose phrases have affectionately become known as Tedisms. Whenever there was a breakthrough in their investigations, Hastings would exclaim, “Now we’re sucking diesel”.

In the mid-1950s, when Heinrich Böll, the author of Irish Journal, came to Ireland, he found that two of the most common turns of speech were “It could be worse”, and what he called its twin sister, “I shouldn’t worry”. He made the point that in Germany the opposite is the case and their sense of humour deserts them – whatever happens is always the worst. But in Ireland, if you break a leg, miss a train or go bankrupt, Böll wrote, people love the rejoinder, “It could be worse”.

In an earlier generation, the historian Patrick Weston Joyce, highly regarded for his research in Irish etymology, was a collector of music as well as curious phrases.

His memory was a storehouse of idiom and vocabulary, and in his humorous book English As We Speak It In Ireland (1910), he outlined sayings he had been collecting for more than 20 years, such as, “To go with your finger in your mouth”, or in other words to go on a fool’s errand without exactly knowing the particulars of why you are going. If someone is a bit daft, then “He’s not all there” or “There’s a slate off”, and to a person “everlastingly talking”, it would be suggested, “Give your tongue a holiday”.

The Joyce tradition of preserving words continues through the good offices of historians around the country with long-forgotten witticisms or droll put-downs enjoying a renaissance.

Many have been handed down as part of the rich oral tradition and local history books frequently include them in glossaries. Themes embrace the weather, marriage, work, shopping, food and drink, good or bad luck and occasionally vilification. “She had a tongue that would clip a hedge” might be interpreted as a woman with a biting and sarcastic flow of invective; or if someone used an abusive barb, “He hadn’t a word to throw to the dog”. After a young farmer came in from a long day’s work in the field, he inevitably had a huge appetite and “He would ate his way through a warehouse”. If his mother said “I don’t boil me cabbage twice”, then she would not be in the habit of repeating herself, while “He never asked me if I’d a mouth on me” implied you would have liked your dinner.

In farming life, “A lazy man’s load” described a tractor that was heavily laden, thus avoiding going back a second time.

In the marital world, a union that did not succeed might be rendered through the quip, “She took her hens to a bad market”.

When relatives began quarrelling but later made up, it was said, “They called each other everything one minute, and the next were as thick as thieves”. If someone was far from being shy, the epithet was construed, “He’s not backward in going forward”. When a father was in an angry mood then, “He was as carnaptious as a bear with a sore head”. Some sayings were referred to as a catch-cry: “You know you’re in luck when your ass is in foal”, or “Luck’s a king and luck’s a beggar”.

Bargain-hunting in rural towns has always produced colourful adages, especially if a deal is struck in a huckster shop selling everything from a crutch to a cradle. “You couldn’t be bad to that” is a common term, while a wife returning from shopping who complains “Sorra thing could I find” means there was nothing suitable in the shops – “sorra” was from sorrow, expressing disappointment. If the weather was bad but had to be tholed, the pub philosopher concluded “We never died a winter yet”.

Because of their nature, quite a few expressions are localised, reflecting a protracted memory. In Longford, the phrase “A big hushion of a man or woman” stemmed from the fact that the German Hessian cavalry were part of the British forces at the Battle of Ballinamuck and were heavily built.

Another Tedism is the word “fella” or “young fella”, particularly prevalent in Derry speak where it is used for a man of any age. This serves as a reminder of a phrase cited by the author Robert Lynd to describe an accident: “Fellafellaffalary”, which disguises the sentence “A fellow fell off a lorry”. But then again, of course, it could be worse.