Fintan O’Toole: A spiffing tale of how Brexit was ‘spaffed’ away 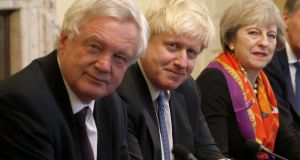 Back in 2016, British prime minister Theresa May with then foreign secretary Boris Johnson and then secretary of state for exiting the European Union David Davis (left): Chris Patten in a foreword to Cook’s book describes Davis as “breezy, open, amiable, lazy and incompetent”. Photograph: Peter Nicholls

The word of the moment in England seems to be “spaff” or its variants, “spaffed” and “spaffing”. The Oxford English Dictionary, even in its regularly updated online version, has not caught up with it yet, but it is nonetheless fashionable in political and media discourse.

When words bubble up from obscurity like this, they often tell us something about the Zeitgeist, and spaffing is very Brexity.

It is a public schoolboy term for male ejaculation. One of the earliest examples I can find in print is from an account in the Telegraph of a visit to a sperm bank: “I decided to spaff into a cup back in 2014.” It has since come to mean any form of careless waste.

Old Etonian Boris Johnson speaks, with exquisite bad taste, of money spent on police probes into historical child abuse allegations being “spaffed up the wall”. It seems apt, both that English public discourse would need a word to describe the pleasures of pointless self-abuse and that it would find it in the puerile vocabulary of its male elite.

I find a particularly interesting example, though, in Chris Cook’s riveting new account of how the British screwed up their negotiations with the EU, Defeated by Brexit. It is January 2017 and it is finally dawning on Theresa May and those around her that the Irish/UK Border really is a problem.

May’s joint chief of staff Fiona Hill instructs Britain’s most senior civil servant, the cabinet secretary Sir Jeremy Heywood, to commission experts to come up with technological solutions. Her actual instruction is: “spaff some money on some geeks”. Eloquent in so many ways.

Cook’s book is the first coherent account we have of the Brexit negotiations as seen by the politicians and civil servants involved on the British side. It is careful and considered and all the more devastating for its deadpan tone. It goes a long way towards answering a question over which generations of historians will argue. Was May merely the fall guy for an inevitable failure or was she utterly incompetent? The answer is of course both – May was doomed to fail but she and her government sure managed, to adapt Samuel Beckett, to fail better.

It is worth saying that the EU made mistakes, especially in the period between the Brexit referendum in June 2016 and May’s triggering of the Article 50 withdrawal process in March 2017.

Brussels pressured her to invoke Article 50 quickly, which meant of course setting the clock ticking before she had created any clear consensus about what Britain could realistically hope to achieve. It also refused to engage in “pre-negotiations” that might have allowed for some informal testing out of those possibilities.

These were tactical victories for the EU side but strategic mistakes – they contributed to what we are obliged to call the spaffing up the wall of the precious two years of negotiation.

The cohort of senior officials working on Brexit were nearly all  'generalists' with little knowledge of the EU or trade, and an average age of 30

But given the perfect storm of political incompetence and administrative incapacity on the British side, this contribution was in truth quite small.

Cook’s informants within the diplomatic service tell him that, a year before the referendum, their Irish counterparts were already cornering them at EU meetings and demanding “answers about what would happen in the event of a Leave vote”.

But the British did not merely not have the answers – they were not allowed to have them. According to one official, “the instruction” to Whitehall from David Cameron’s government “was clear: Don’t do any preparation.” Another official explains: “Our contingency for losing [the referendum] was not losing.”

When they did lose, May came to power and established the “department for exiting the European Union” under David Davis, described by Chris Patten in a foreword to Cook’s book as “breezy, open, amiable, lazy and incompetent”. Mandarins who had actually worked on European issues were actively excluded on the grounds that they might have “gone native”.

The result, according to Cook’s analysis of the cohort of senior officials working on Brexit, is not merely that nearly all of them were “generalists” with little knowledge of the EU or trade, but that, astonishingly, their average age is 30.

“A third of the department were born since the passing of the Maastricht Treaty in 1991.” Is it surprising that the gallant youth of England, sent to charge the heavy guns of Brussels with their flashing sabres, got mown down?

And then there was May. She simply refused all entreaties from her officials to make a decision on the most obvious question: did the UK want to remain in the customs union?

“Stop bringing me binary choices,” she snapped at them. “This is not going to be a binary choice.” She decided in mid-2017 that no-deal was impossible – but then decided not to tell anybody. Above all, she indulged a fatal miscalculation by some of her cabinet who continued to believe, as one minister tells Cook, “that the Irish were really bluffing about this”.

On the ideas floating around in Whitehall for the Border, one official asks Cook: “Has someone told you about facial recognition for pigs?” His mind-blowing book is a spiffing tale of a state spaffing away its culture of competence.