Finn McRedmond: Trump has gone from Twitter…who is next?

Tech giants should not have this kind of control over speech 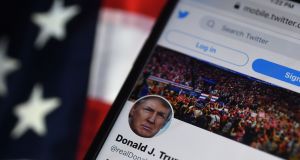 There is little doubt that Donald Trump’s words on Twitter acted as an incentive to violence for the mob. Photograph: Olivier Douliery/AFP

In the early days of the internet plenty of ink was spilled on its potential revolutionary power. It would democratise information, enable mass communication and see big corporations and governments cede power to the people.

This vaunted cyber-utopia never came to be. And the recent actions of the social media giants – Twitter and Facebook specifically – have proven the internet has entrenched the power imbalances it was once fated to redress.

Last Friday Twitter banned US president Donald Trump on the grounds that he encouraged the storming of the Capitol two days prior. Their ban was swiftly followed by Facebook, Amazon and Google among others. There is little doubt that Trump had a direct and pernicious role in the Capitol raid, not least after months of using these platforms to fuel the false narrative that the election was illegitimate. And there is little doubt that Trump’s words on Twitter acted as an incentive to violence for the mob.

So there are a litany of compelling reasons for depriving him of his account. He was inciting violence. He was directly interfering in the process of a live democratic election. Twitter has no obligation to provide him with a platform. This is all well and good, but the question we should be asking is not whether the ban is warranted, but whether that decision should fall within the remit of private social media companies at all.

Those celebrating the move – and they are seemingly in their millions – say this was a righteous decision made in good faith by Twitter. His right to free speech is not compromised because Twitter has no obligation to uphold speech, they add. The First Amendment only protects you from censorship from the government. Twitter can do as it pleases.

It is a neat argument and certainly convenient for anyone distressed by the havoc Trump’s online presence can wreak. But it is a rather flimsy defence. And a defence grounded in a wilful inability to accept the world now is vastly different to the one in which the First Amendment was conceived.

Because now we have tech behemoths so large they are almost governmental in their power. The architects of the First Amendment could hardly have conceived of a world where these tech companies would wield this disproportionate power. But all that proves is that its current provisions are inadequate for this new media and technological landscape. Instead, it allows private companies to self-regulate, and exercise overweening influence on who can say what, and where they can say it.

German chancellor Angela Merkel’s intervention was right: social media should not become a lawless land, but these kinds of decisions should fall within the remit of governments who are subject to elections, checks and balances, and interests that extend purely beyond commercial ones.

It is easier in Europe, where most countries already impose tighter restrictions on speech. Germany, for example, regulates against hate speech online. And crucially, Europe is not caught in the throes of this near romantic attachment to the First Amendment.

That Twitter and Facebook should not be able to exercise this kind of control over speech is obvious. In the first instance, of course social media giants ought to have no interest in platforming someone actively trying to undermine the democratic process. Operating in an environment that does not function under the rule of law is hardly advantageous. They should naturally want to promote a political and media climate that is predictable and rational. The self-interest case is obvious.

But it is precisely because big tech has vested corporate interests that they cannot be the ones to regulate the landscape. The challenge of governments is to fill this legislative hole that allows the likes of Facebook chief Mark Zuckerberg and Twitter chief Jack Dorsey to make such consequential decisions on personal whims.

Not least because we can see how erratic their actions have become. If the situation at the Capitol was so dangerous and volatile that private actors ought to step in and ban Trump, then where was the same impetus to ban him amid his unfettered provocation of Iran over their sites at the beginning of last year? The decision to ban him now does not seem to have emerged from any steadfast, transparent principle about preventing violence, but rather an arbitrary decision from Twitter about the kind of violence they deem acceptable.

If they cannot adhere to simple principles in the case of Trump alone, then we cannot reasonably argue that they will adhere to fair and good faith principles when the cases are less clear cut and operating in shades of grey. What happens if financial or political pressure becomes so great that large-scale bans can be wielded like a blunt instrument?

The case for social media giants self-regulating falls apart before it even gets off the ground. But if we also understand Twitter or Facebook’s capacity to facilitate violence, or undermine democratic processes, we have to accept regulation from somewhere. The remaining levers we can pull, then, are governmental ones.

The storming of the Capitol was a frightening moment in America. And the decision to ban Trump in its wake may not have been the wrong one. But without the imposition of external checks and balances on private tech companies, we are likely facing something much scarier.