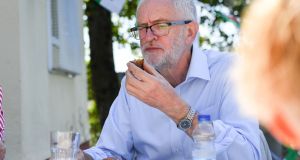 Leader of UK Labour Party Jeremy Corbyn: He is not minded to represent Ireland in 2019, nor equipped to protect its interests against a destructive Brexit. Photograph: Jacob King/PA

It is easy to talk about how the Tories are failing Ireland. Boris Johnson refusing to negotiate with the EU until they slash the backstop is evidence enough of a party unconcerned with putting up a hard border.

His failure to offer any workable alternative is further proof that the British government is headed straight for a no-deal Brexit on October 31st.

Less talked about is how Labour is failing Ireland too. When articulated, its Brexit proposals have been ambiguous beyond comprehension, and when crystallised into something tangible they’ve been swiftly dumped. Its solutions to the Border are unworkable.

It leans towards a customs union-style exit, seemingly incapable of understanding that anything shy of single market-style alignment makes a hard border inevitable.

In this way, the Conservatives and Labour are mirror images of each other – neither concerned with the details of the Irish Border, myopically obsessed with domestic politics, and preferring Ireland kept quiet rather than upset the political process of Brexit.

Westminster is gripped by cultural amnesia, forgetting that the Belfast Agreement was a solution to a protracted period of violence, and unwilling to confront the hard realities necessary to prevent a likely return to that violence.

But the failings of Labour’s policy emerge from a problem that runs much deeper in the party’s leadership. Jeremy Corbyn and shadow chancellor John McDonnell historically allied themselves with extreme Irish nationalist forces, and both believe the easiest solution to the Ireland problem lies in reunification.

Their sympathies have never rested with the hard-won, fragile peace, nor with the moderate sensibilities required to maintain it.

Jeremy Corbyn’s electoral appeal is rooted in his so-called unwavering principles – another way of saying that he never changes his mind. His supporters in London and across the UK acclaim this as the highest of moral virtues.

But when understood in terms of his historic allegiances in Ireland, it is hard to believe he has divested himself of these extremist sympathies developed years before peace talks even began.

Where the Tories and the right-wing press believe in an antiquated idea of Ireland as the subordinate neighbour, a passive voice amid greater powers, the Labour leadership still sees a pre-Belfast Agreement Ireland. One in which the Republic hasn’t given up its constitutional claim over the North, and one where the primary concerns of its inhabitants are the nationalist struggles against external oppressive forces.

The realities of the peace settlement of the late 1990s don’t matter when Corbyn’s political calling card is that he hasn’t changed his mind since the 1970s.

The Labour leadership’s attempt, therefore, to speak for modern Ireland is inherently flawed, rooted in an outdated association with an Ireland that has long since ceased to exist. Corbyn’s project is based on a rejection of New Labour, which he sees as a capitulation to the Thatcherite revolution.

That Tony Blair and his New Labour compatriots were primary architects of the Belfast Agreement seems to elude Corbyn, McDonnell and their Remain-voting supporters alike. At a fundamental level, then, the leadership refuses to accept a new political reality – if not in letter at least in sympathy.

Labour under this leadership is not a party minded to represent Ireland in 2019, nor one equipped to protect its interests against a socially and economically destructive Brexit. Instead, it is a party dominated by two figures as caught in the past as the Conservatives, and as uninterested in reconfiguring their prejudices.

That Corbyn himself is a life-long Eurosceptic shouldn’t be forgotten. He would happily see the UK leave the EU’s capitalist club. Any chaos brought on by a disorderly Brexit is a bonus – he can blame the Tories and clear his path to No 10.

That Corbyn himself is a life-long Eurosceptic shouldn’t be forgotten. Any chaos from a disorderly Brexit is a bonus

While Remainers and moderate Leavers are aghast at a Conservative Brexit, Labour as it stands can offer no credible alternative. They are inconsistent; their policy so far inadequate; they reject the language of centrism and moderation as bound up with the Blairite past. The impact on Ireland, North and South alike, is secondary.

So when it comes to Brexit, there is no saviour for Ireland waiting in the wings of Westminster. Leo Varadkar is wrong to believe parliament will successfully stymie a no-deal Brexit, and the Irish Government would be wrong to put their faith in Corbyn.

No wonder that Ireland finds itself so naturally allied with the EU, at its core, a collection of states whose political cultures – like Ireland – were forged by war, occupation, partition and finally prosperity under the European banner. Neither Johnson nor Corbyn can grasp why a nation like Ireland would see such value in the European Union and its institutions.

The Tories are unable to understand why Ireland would cleave to the EU in a crisis, and Labour is unable to get why Ireland is comfortable with the pre-Brexit status quo. Neither can make any claim to understanding Ireland’s position in the European bloc – as a modern and outward-looking country, at ease with itself, supported by allies great and small alike.

Finn McRedmond is based in Westminster and writes for current affairs website Reaction.life and City AM

1 How long can Government afford to keep State pension age at 66?
2 One hundred Irish retailers for all your online Christmas shopping
3 Covid-19: Pressure over breakdown in tracing system intensifies as State enters Level 5
4 Miriam Lord: All test and no trace makes Jack, and heaven knows who else, a very ill boy
5 What I learned about male desire in a sex-doll factory
Real news has value SUBSCRIBE