Brian Boyd: Enough of the flight shaming and train bragging 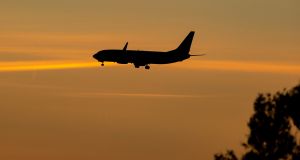 Flying is the new smoking, becoming as socially unacceptable as the wearing of a fur coat to a vegan restaurant. File photograph: Peter Byrne/PA Wire

The media love a folk devil. A villain is identified, and the sensationalist, over-the-top coverage that follows speaks of a lack of morality and damage to society. The folk devil du jour is flying – as Prince Harry and Meghan Markle found out this week. Their incorrigible habit of blithely hopping aboard a private jet every Friday afternoon is, we read, precipitating the end of the world.

Flying is the new smoking, becoming as socially unacceptable as the wearing of a fur coat to a vegan restaurant. The Scandinavians, who always have a guilttrip on the go, are currently boring everyone to near death with their talk of “flight shaming” and “train bragging” – the latter being the hashtag you are compelled to use on social media when taking a train instead of flying to indicate your impending beatification.

You can now play your panpipes on the train trip from Stockholm to Paris (a 24-hour journey) instead of taking the big, bad aeroplane (2 hours, 30 minutes). Which is nice if you have 24 hours to spare to glumly stare out at the wonders of rural Denmark and northern Germany.

When the drinks industry found itself in a spot of bother of late with interfering health-conscious busybodies it went for the old reverse psychology marketing trick. “Drink Responsibly” they told us, by which they meant “please keep on consuming large amounts of alcohol but not so much that the government will step in and regulate us out of our ridiculously profitable business”.

The aviation industry is now using the same three-card trick. “Fly Responsibly,” says the Dutch carrier KLM in its new PR offensive. “Join us today for a more sustainable tomorrow”it implores as it recommends its passengers to consider taking the train instead on short-haul routes or Skyping a business meeting instead of flying to it.

It is also asking passengers to buy carbon offsets to mitigate the damage of their flights. The Catholic Church used to do something similar when it sold indulgences – that didn’t work out too well for it.

In Sweden the SAS carrier is churning out press releases about its new fuel-efficient aircraft, all the biofuel it is going to buy and “technological fixes” to minimise waste on board.

Tellingly, when the American rail company Amtrak announced its new high-speed rail link between New York and Washington DC the two new features it was most keen to emphasise were the high-speed wifi on board and the availability of craft beers.

The media love an easy and readily understandable folk devil, and by isolating flying from the complex environmental debate they’re serving it up on a platter, garnished with sanctimoniousness.

Flight shaming is a particularly Eurocentric preoccupation. It is easy to shriek about the environmental damage of flying when you live on a continent where the cultural and linguistic diversity most travellers enjoy are but a car journey/train trip away. Not so much if you live in Australia, Brazil, Russia or India.

Not everyone can afford to be away from their work/family for the duration of an eco-friendly train journey compared to the speed and efficacy of air travel.

And not everyone appreciates that those who have the time to sit on an overnight train journey use it to brag about their eco-credentials and “shame” the rest of us.

For good or ill, air travel serves a vital social function (not least, never having to see Holyhead again). It connects us with friends and family, and offers life-enhancing experiences. And as Mark Twain once noted “travel is fatal to prejudice, bigotry and narrow-mindedness”.

Air travel as a folk devil grips us because it seems to be a reasonable and simple ask of us for the sake of the environment – just as ordering a meat-free burger rather than a hamburger is.

And are we missing the forest here for the carbon-emitting trees?

If cement were a country it would be the third largest carbon-dioxide emitter in the world. Its massive carbon footprint has never been meaningfully addressed by governments even though on its own, cement production could jeopardise the whole 2015 Paris agreement.

The BBC refers to it as “the massive CO2 emitter you know nothing about”, while the Guardian calls the concrete made from cement as “the most destructive material on earth”.

Also, being a cement production activist and posting hashtags on social media about concrete doesn’t quite have the same zeitgeist-embracing cachet as flight shaming and train bragging.

Better the folk devil of flying you know than the inconvenient truth of where the damage is really being done.