Una Mullally: Direct provision fits with our history of incarcerating the innocent 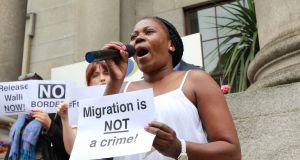 Asylum seeker and activist Ellie Kisyombe still faces out-of-the-blue instructions to move from her accommodation, as she did recently. Photograph: Nick Bradshaw

It’s only right that the images from the US-Mexican border of children being separated from their parents caused a global uproar. Donald Trump’s American carnage continues. He caused a horrific problem, blamed others, and then wanted credit and absolution when he “addressed” it in a phoney, gaslighting manner.

Social media was full of Irish people outraged at the lack of empathy that has now become the dominant characteristic of the Trump administration, and a morally crumbling America. But in Ireland, our own government is presiding over a system of indefinitely incarcerating asylum seekers of all ages, including children, which is a profitable industry for the private companies running direct provision centres and accommodation.

Asylum seekers, who arguably have the fewest rights in our State, have been advocating for change with the little voice that they have.

They have sued the State, and won the right to work. In 2017, the Supreme Court struck down a ban preventing asylum seekers from working. This was great news for people living in direct provision who wanted to work. Yet like so many aspects of how we deal with asylum seekers in Ireland, the State gives (or in this case, was forced by the courts to give) with one hand, and takes away with another. No application for a work permit from an asylum seeker has been successful. Asylum seekers are excluded from a long list of professions making it very difficult to be eligible for a work permit. A total of 370 have applied successfully for self-employment status. There is now a court ruling in Ireland that asylum seekers have a right to work, but that right is not being honoured on a practical level.

Asylum seekers have campaigned, like the activist Ellie Kisyombe has, for the right to cook for themselves and their children. Kisyombe established the Our Table project, yet 5½ years on she is still struggling with the stress of living in direct provision. Her activism is inspiring and she is a credit to Ireland, yet she still faces out-of-the-blue instructions to move from her accommodation, as she did recently.

Asylum seekers here are ignored, silenced, moved around centres with little warning, given a tiny stipend to survive, and exist in a highly pressurised state. They are forced to live in circumstances that are demeaning and that strip them of their autonomy. They live in a limbo that has terrible ramifications for their mental health. They are cut off from communities.

Ireland has an awful history of incarcerating people who have done nothing wrong which the RTÉ documentary No Country For Women again illustrated this week. Yet as we digest such a history our Government is presiding over another method of shameful incarceration.

Why are we making things so hard for decent people? In 2017, the Ombudsman received 115 complaints from people living in direct provision. One of those was an 18-year-old girl who was issued with a warning letter from the Reception and Integration Agency (RIA) about “absences” from the direct provision centre she was living in in the southwest of the country as she was travelling to Dublin for school during the week and then back to the centre at the weekends.

Occasionally we hear stories about inspiring asylum seekers who against all odds are trying to better their lives in Ireland. We should not have to be inspired by people to help them. We should let the most vulnerable people in the State tell us what’s wrong with it, because those are the ones who usually know the score.

Irish people need to stand up for the most vulnerable people in our society, which we have shown we can do again and again, and demand that direct provision be dismantled. A more humane, empathic, better-functioning system should be established. One where people’s applications are processed quickly. Where they have a real right to work, and where they can live in decent conditions and are not closed off from communities.

This week is World Refugee Week. Sometimes it feels as though the plight of refugees, asylum seekers and migrants, which is the plight of our time, is overwhelming and impossible for individuals to have an impact in any meaningful way. But if we can’t solve things on the US-Mexican border, if we can barely grapple with the ongoing loss of life in the Mediterranean, then surely we can do something in our own back yard.