Fergal Keane: RIC row threatens to drag us into a dangerous place 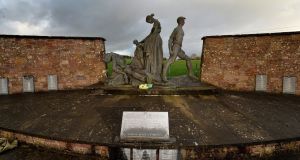 My great grandfather Patrick Hassett was an RIC man from Co Clare. Three of his brothers also joined the force. They grew up on a small farm in Knockanean outside Ennis. Other relatives went to America and England to escape the poverty of rural Ireland.

By the late 19th century Patrick was reaching the end of his career and was a sergeant based in Ardmore, Co Waterford. He was once described by the Cork Examiner as a man of “rare coolness and self possession”. Sgt Hassett had killed a rabid dog that was threatening the life of a young boy.

That was in March 1895. The Sgt had long since retired by the time his son and namesake Paddy joined the IRA in Cork city during the War of Independence. The RIC were his enemy.

If needs be Paddy Hassett would have given his life for the cause of Irish independence and he was prepared to take Irish lives to achieve that goal. In Cork city the RIC and IRA dealt ruthlessly with each other.

How did my grandfather feel about his own father’s service with the Royal Irish Constabulary? Nobody ever knew. Like so many of the revolutionary generation Paddy Hassett did not speak of the past.

I have been thinking of Hassett father and son as the debate intensifies over the now deferred plans to commemorate the RIC. As is apparent I have several interests. My remembrance of the past is complicated by the knowledge of opposing loyalties, different ideas of Ireland.

Service in the RIC enabled my great grandfather to ensure that his children were well educated and lived in financial security. He devoted his adult life to upholding the then law of the land. The RIC man’s work could range from prosecuting petty criminals to arresting revolutionaries.

Like the majority of Irish people of his age Sgt Hassett was not a revolutionary or a visionary. His Ireland had emerged from the horror of the Famine and the upheavals of the Land War into what appeared to be an ordered polity.

Even by 1919 when the War of Independence began there was nothing remotely inevitable about the decline of the British empire. The RIC would have felt they were still on the right side of history.

Many would still have hoped for Irish Home Rule and would have regarded a takeover by armed revolutionaries like my grandfather with horror. To cast the average RIC man as a malign agent of imperialism is a simplistic reading of history.

But in reacting to the current row we need to recognise the impact of contemporary crises. We live in angry times. The political atmosphere has been soured by the debate over Brexit and its impact on Ireland, by the failure to restore devolved government at Stormont, and the mooted end to Troubles era prosecutions of British troops.

The hopeful days that followed the Good Friday Agreement have long vanished and with them, I fear, the possibility of more nuanced responses.

The focus now is on the place of the RIC in centenary commemorations. But we need to look ahead. Where does the current row leave plans to commemorate the Civil War? Again I must declare an interest.

When the IRA split my father’s people in north Kerry joined the Free State army side. This was after fighting against the RIC and British troops during the War of Independence.

The Civil War in Kerry was a terrible affair. How do we commemorate that conflict in the shadow of the Ballyseedy massacre when Free State troops tied IRA prisoners to a landmine and blew them to pieces?

How should we remember Eamon de Valera’s inflammatory warning about wading “through Irish blood” to achieve freedom, or the murder of Free State minister, Kevin O’Higgins, elderly father at his home in reprisal for his son’s signing of death warrants for republican prisoners?

Consider the possible ramifications in the longer term. The ground has narrowed alarmingly at a time when we are being asked to consider the possibility of a border poll. The families of RUC members killed in the Troubles may watch this debate and wonder what place for the memory of their loved ones in a new Ireland.

Our revolutionary past is heavy with blood and claims of betrayal. But one of the great liberations of the post-Troubles era was to shift the consideration of Irish history away from battles between nationalist and revisionist. The silencing of the guns made it easier to acknowledge the complexity of the past.

The age of social media does the opposite. Slogans replace intelligent appraisal. We risk descending into the arid wilderness of name calling. To ask that we take a broader view or tolerate an opposing idea does not merit recourse to catch-calls like West Brit or Blueshirt. It is equally facile and dangerous to denigrate opponents of the postponed commemoration service as atavists or tribal nationalists.

These are perilous times. Taking a step back to the spirit of conciliation that marked the end of the Troubles in the North seems impossible to imagine. But without that kind of flexibility the centenaries of the next few years threaten to drag us onto ever narrowing ground.

While there are legitimate questions for the Government about how the ceremony was imagined, discussed and organised, these should not blind us to the powerful truth – the majority of RIC men and their IRA opponents were born on and grew up to love the same land. They fought for different visions of Ireland but acknowledging the love they shared would be a good place to start.”

Fergal Keane is the author ‘Wounds – A Memoir of War and Love’ published by Harper Collins. He is also a senior Foreign Correspondent with the BBC