English will remain the working language of the EU after Brexit

English allowed the Polish official talk to her Italian colleague who in turn needed to seek advice, in English, from their Finnish boss 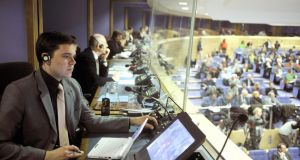 European Commission translators at work: Sad and all as Brexit is, it opens up opportunities in the EU institutions for Irish citizens. Photograph: Dominique Faget/AFP/Getty Images

In 1989 a number of colleagues and I were seconded on a three-year contract to the European Commission from the Irish Civil Service. One reason we got the contract was that we all spoke French pretty well. The UK and Ireland had joined the EEC in 1973, but French was still the language of communication within the EU institutions. This was partly for historical reasons and partly because the institutions were located in predominantly French-speaking cities: Brussels, Luxembourg and Strasbourg. The UK and Irish officials alone were not numerous enough to make a difference to the language regime.

A few years later I was still there, but as a permanent English translator. The job mainly involved translating legislative proposals drafted in French for examination by the politicians and civil servants in Ireland and the UK. French reigned supreme.

In 1993 something odd happened across the commission. The Swedes, Finns and Austrians had just joined. The cheery “bonjour!” one shared with colleagues in the lift began increasingly to switch to “good morning!” Over time, English was heard increasingly in the corridors and was used to draft legislation, as it was the first foreign language of an increasing number of new officials who needed a common language for consultation purposes.

The 2004 enlargement brought in a number of officials from 10 new member states, nearly all of whose national education systems offered English as first foreign language, not French.

By 2015 it was estimated that more than 80 per cent of new draft legislative proposals were being drafted internally in the commission in English. This language change, over a relatively short time, was hard to take for many older staff who had spent their entire careers working through French and whose knowledge of English was shaky, to put it mildly.

The work of the commission’s English language translation service changed radically too, as a result: instead of translating outgoing legislation our main task involved coping with the deluge of incoming documents from the member states and other interested parties in the various official languages, not to mention the occasional piece of Russian, Turkish, Ukrainian or Chinese.

An English translator at the commission now translates from six languages on average, to cope with the translation demand. Regardless of the nationality of the officials requesting translation of a document in a language they cannot read, they almost invariably ask for an English translation, so their colleagues can read it and be consulted on it as well. This is the situation today and it is unlikely to change. What could it change to, with national education systems so geared towards teaching English as first foreign language?

There have been suggestions that English will no longer be an official EU language after Brexit. Such legalistic musings are, in my view, just that. While French and German are also official working languages of the EU institutions, the dominant position of English as the primary vehicle of communication is too deeply ingrained at this stage to change.

If legal changes are needed to keep English official, I am prepared to wage a large bet they will be made in double quick time – and probably far sooner than the conclusion of the negotiations on Brexit.

Sad and all as Brexit is, it opens up opportunities in the EU institutions for Irish citizens. English-speaking officials, both administrators and clerical assistants, are in great demand for their native English skills. Future selection competitions for recruitment, without competition from British nationals, should therefore favour Irish nationals a little more than in the past. This goes in particular for competitions for English translators, from which UK nationals may be excluded.

While a knowledge of French or German is currently specified for English translation competition purposes, along with one other official EU language, languages such as Polish, Greek, Finnish, Latvian and Lithuanian are very much in demand by the English language departments of the various institutions.

I am confident that Irish people, whether as administrators or translators, will continue to have a positive and influential role to play in the EU institutions and our native command of English will even enhance our value to the institutions. Donal Carey is a former translator with the European Commission