The Irish Times view on women in the Dáil: Progress has stalled

Much remains to be done to make politics an attractive career option, not least as regards maternity leave and working hours 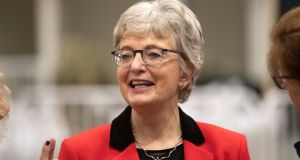 Minister for Children Katherine Zappone was one of several high-profile and hard-working women politicians from across the political spectrum who lost their seats. Photograph: Colin Keegan/ Collins Dublin

A disappointing feature of the general election was that the number of women elected to the 33rd Dáil increased by just one. In all 36 women were elected to the 160-member chamber, compared to 35 last time around. It had been anticipated that the introduction of gender quotas for the 2016 election, providing an inducement to parties to run more women candidates, would over time lead to a more even divide between the sexes in the Dáil.

But after a significant increase in 2016, the movement towards greater equality has stalled with women to make up just 23 per cent of the new Dáil. To compound matters, a number of high profile women politicians from across the political spectrum lost their seats. Among them were Minister for Children Katherine Zappone, Minister for Social Protection Regina Doherty, Minister of State for Health Catherine Byrne and Minister of State for Higher Education Mary Mitchell O’Connor. High-profile casualties on the Opposition side included former Labour tánaiste Joan Burton, former minister for housing Jan O’Sullivan, Fianna Fáil front benchers Lisa Chambers, Fiona O’Loughlin and Margaret Murphy O’Mahony as well as Solidarity TD Ruth Coppinger. The people have spoken and that is their prerogative.

However, out of the 39 constituencies, 12 now have no woman TD. The Taoiseach’s constituency of Dublin West, which had two out of four women TDs in the last Dáil, is now all-male. Dublin Bay South is another all male bastion. The three big parties – Sinn Féin, Fianna Fáil and Fine Gael – just about met the target of having 30 per cent women candidates. Some of the smaller parties did better. The most impressive result was that of the Social Democrats which returned four female and two male TDs. Almost 40 per cent of the Green candidates were women but only two were elected.

Much remains to be done to make politics an attractive career option, not least as regards maternity leave and working hours. That task should be an important one for the next government.