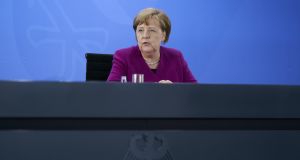 After two years of planning, Germany assumes the Europen Council’s rotating presidency in a month. Thanks to the Covid-19 pandemic, the only detail of its presidency plan to survive is the logo: an endless loop known as a “Möbius strip”. You can create one by taking a tape-like strip of material, giving one end a short twist and fusing both ends. What makes a Möbius strip interesting is how two lines, sent off in different sides and on opposite sides, eventually meet. For Germany this phenomenon reflects how, in the EU, 27 sovereign states’ divergent positions eventually converge.

Chancellor Angela Merkel will need something far stronger than Möbius strips to get her through to Christmas. Last week, with characteristically laconic understatement, she suggested the pandemic would require “considerable adjustment” to Germany’s EU presidency plans. German civil servants know that, culturally speaking, busking is not their speciality. But they are being led by a woman who, in her 15 years in power, has become the uncrowned queen of drive-by-sight politics.

The EU’s rolling schedule meant this was already going to be a crucial presidency, with deadlines looming on a final Brexit deal and agreement on the EU’s upcoming seven-year budget.

Covid-19 has now upended everything. But like epidemiologists grappling with the novel coronavirus, Dr Merkel, a physicist, treats politics as a long-term laboratory experiment: when new information comes in, the procedures are adapted, the experiment is adjusted and run again.

With an eye on her political legacy, Dr Merkel hopes to use the common Covid-19 thread of crisis to draw together EU challenges new and old – economics, health, migration, climate and rule of law – to make a major integration push.

As Merkel’s fourth and final term enters its last year, Europe’s longest-serving leader faces an Olympian test of her eye for detail, her nose for negotiation and her ear for compromise. In this time of crisis, as the limits and potential of politics are being recalibrated, the EU can draw one last time on Europe’s safest pair of hands.