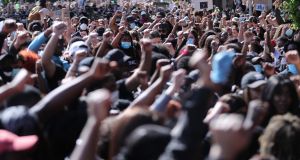 People at a Black Lives Matter protest rally outside the US Embassy in Dublin on Monday. Photograph: Niall Carson/PA Wire

In the midst of a pandemic that has already claimed more than 100,000 lives and a deep depression, the United States now finds itself convulsed by the biggest civil uprisings in more than half a century. Meanwhile, a president who has made the stoking of racial divisions a chief component of his political persona hunkers down in the White House, issuing incendiary tweets and brooding over his electoral fortunes yet paralysed by his chronic inability to provide the leadership his country so badly needs.

Racism is one of America’s original faultlines, and sadly neither police aggression nor the public fury it can provoke are unfamiliar features of 21st century life in the US. But the wave of mostly peaceful demonstrations that has swept the country since the horrific killing of an unarmed black man, George Floyd, by a Minneapolis police officer, is also inextricable from the moment we live in. Floyd’s killing was recorded by phone. The footage shows police officer Derek Chauvin kneeling on his neck for eight minutes and 46 seconds, even after he pleaded for breath. The imagery is so clear and so disturbing that there was virtually no defence that the usual right-wing apologists for police brutality could muster.

Moreover, the turmoil comes at a time when a painful sense of everyday injustice courses through America’s minority communities, who have been disproportionately exposed to the health and economic crises set off by Covid-19. The protests were lit by the spark in Minneapolis, but behind the justifiable fury over police brutality against African-Americans is a broader sense of despair about ingrained inequalities.

And of course there is the president himself. At a time when the US is crying out for moral leadership, it has as its head of state a man who defended white nationalists carrying torches at a 2017 rally in Charlottesville, Virginia, and whose stock among African-Americans could scarcely be lower. Donald Trump’s low profile over the past 72 hours came as a small blessing, but the leadership vacuum ultimately makes it a great deal harder to restore order let alone salve the wounds that Minneapolis exposed. Certainly, the police cannot be relied on to defuse tensions; in many places they are inflaming them, with videos showing officers using batons or firing tear gas and rubber bullets at protesters, journalists and passersby.

Trump is not the cause of American racism. Nor will it expire when his presidency ends. But as president he, more than anyone, can shape the course of the current crisis. By restraining his own worst instincts, appealing for calm and acknowledging the painfully legitimate grievances that gave rise to the protests, he can help bring the US back from the brink. It’s a measure of America’s malaise that, in a time of crisis, such appeals to the president’s sense of justice and responsibility are more likely to fall on deaf ears.