The Irish Times view on Covid-19 in Northern Ireland: a health crisis – and a political one

As if a novel and mutating virus was not threat enough, old political unsayables are part of the public health crisis in Northern Ireland 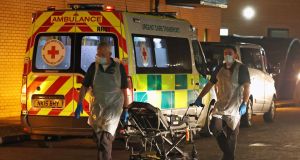 As if a novel and mutating virus was not threat enough, old political unsayables are part of the public health crisis in Northern Ireland. With a population half that of the Republic, the North’s Covid-19 transmission rates are four times higher. The Government is genuine in offering support and coordination to the Northern Executive while also worrying about cross-border infection. The restrictions the Executive agreed yesterday fell short of those their own experts have been outlining.

Since the pandemic struck, public health specialist Dr Gabriel Scally has been foremost in arguing for all-island measures, reinforced by outspoken Derry GP Dr Tom Black, who is chair of the British Medical Association in Northern Ireland. With doctors treating patients on Wednesday in ambulances in hospital carparks, Dr Scally said the Executive’s health and science team should be replaced and the health minister should resign. Dr Black said political leadership had failed to be clear and rational. Witnessing inertia – or obstruction – as the public health system staggers is plainly intolerable to veteran experts. But medics know that Ulster Unionist minister Robin Swann has argued for longer and more complete lockdowns against the dominant unionist DUP, libertarian and pro-business. And unionist politicians see cross-border strategies threatening the North’s separateness.

His party’s sole minister, Swann has also been weakened by the dysfunctional Executive leadership notionally shared by the DUP and Sinn Féin. That SF breached regulations in June with their west Belfast funeral ceremonies for IRA leader Bobby Storey gave the DUP cover when they twice vetoed the health minister’s lockdown push in October. DUP minister (and possible contender for the party leadership) Edwin Poots used the same excuse when he alleged nationalist districts had six times more infection than unionist areas.

Even as the DUP knocked Swann back in October, scientific adviser Prof Ian Young was deeming it “more likely than not” that the Department of Health would be recommending more restrictions before Christmas.

A health service starved of funding for more than a decade, particularly of student nurse recruitment, could not withstand political dogma plus failure, as in Britain, comprehensively to track and trace.

Modelling by Swann’s department shows overlap between economic deprivation and Covid hospitalisation, without in-depth study of the link between transmission and poverty. But financial support for those on low incomes forced to self-isolate has been slow to arrive, and unemployment and sickness benefits lag well behind those in the Republic. The North’s health crisis needs crisis management, then fundamental exploration.