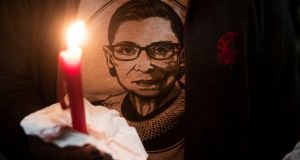 People gather for a candelight vigil to pay their respects to the late US Justice Ruth Bader Ginsburg, outside the Supreme Court in Washington on Saturday. Photograph: Michael Reynolds/EPA

At any time, the passing of a member of the United States supreme court is a significant moment in the country’s national life. Unlike in Ireland, where Bunreacht na hÉireann is regularly changed by referendum, on some occasions expressly to override a judicial decision, the US constitution is virtually unamendable, at least on its most contentious aspects. That gives the nine judges who sit at the apex of the federal court system an immense power – the final word – and means that any changes in the court’s composition can profoundly affect the direction of the country. At a time like this – when the US is bitterly divided, the court is split between conservatives and liberals and a presidential election is just weeks away – the death of Ruth Bader Ginsburg could turn out to be particularly consequential.

The outpouring of grief at news of the 87-year-old’s passing is a measure of Ginsburg’s towering personal achievements. As a pioneering feminist lawyer, she helped to expand the equal protection clause of the US constitution. As a judge, she became a standard-bearer for the court’s liberal wing, her influence in the country at large growing at a time when her influence in the court itself was diminishing. In her later years her ferocious, clear-eyed dissents turned her into a folk hero on the left.

The adulation she received was fully deserved, yet her celebrity, as she must no doubt have been aware, was also a commentary on the unhealthy status of the court itself. A society that finds itself either venerating or demonising its judges has a problem, and in the US the steadily growing power of “the nine” is a function of a broken political system whose poisonous partisan divisions and parliamentary paralysis have turned the upper courts into a subsidiary site of political battle. That has damaged the court, which has lost much of the influence it once had in the common law world, but it also degrades American democracy.

The coming weeks will demonstrate that like never before. President Donald Trump, enabled by the Republican leadership in the Senate, is alive to the mobilising power of a supreme court appointment among conservative voters and is therefore determined to push through a nomination before the November election. Joe Biden and the Democrats will oppose that, but the tactical battle could escalate; some Democrats have suggested the party could retaliate if they take control of the Senate on November 3rd by either eliminating the filibuster or passing legislation to increase the size of the supreme court.

Together, a president chosen by a minority of voters and a Senate party representing an even smaller minority are poised to entrench conservative control of the court so as to frustrate the will of the country’s majority. If that happens to the court, its crisis of legitimacy is only beginning.