The Irish Times view on Covid-19 in Ireland: a patchwork of epidemics

An apparent stabilisation of transmission in Dublin offers hope, but the situation in Ulster remains of huge concern 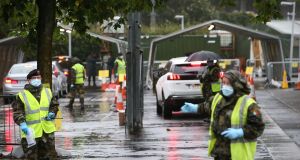 Transmission patterns show that the virus is sensitive to every shift in behaviour and to each adjustment in official preventive measures. Photograph: Stephen Collins/Collins Photos Dublin

Amidst the daily torrent of bad news on Covid-19, it can be difficult to find cause for hope, let alone optimism. Overall, there is no doubt that the island faces a situation more alarming than at any time since the spring. Having reached a point by mid-summer where the disease appeared to be close to extinguished, there are now very significant levels of community transmission reported across every region. All the indicators monitored daily by the National Public Health Emergency Team (Nphet), from case numbers to intensive-care admissions, are causing real concern.

For policymakers and for the general public, the key question now is whether Level 3 restrictions under the State’s “Living with Covid” framework are enough to stem the spread of the disease. And on this there are some tentatively encouraging signs. At the weekend, Minister for Health Stephen Donnelly confirmed that the R-number in the capital is estimated to be at 1, which implies infections are stable. We also know that the average of reported Covid-19 cases in Dublin in the last seven days was 144.5, whereas for the previous seven days it was 188.9. Of further encouragement is the transmission ratio, a metric that captures how much transmission is taking place, which is estimated to be at equilibrium in the capital. If that trend holds, cases can be expected to fall in the coming weeks.

What this suggests is that Level 3, which involved closing indoor restaurants, banning many sports fixtures and curtailing movement across county boundaries, can arrest the growth in transmission in specific areas. The coming weeks will show whether that progress can be sustained. If so, it would strengthen the Government’s case for resisting a Level 5 lockdown. At the same time, however, it would also make it difficult to envisage a return to Level 2 for the foreseeable future, as we know from the experience in Co Kildare and other areas where localised lockdowns were imposed that transmission rebounds when restrictions are relaxed.

While early signs of stabilisation in Dublin offer encouragement, that must be weighed against trends elsewhere. Of particular concern is Northern Ireland and the border region, where transmission is unsustainably high and a rapid rise in cases will, if it continues, put huge pressure on the health services north and south. Even if Level 3 succeeds in reducing growth rates elsewhere in the State, there will be a lag of several weeks because of the delay in imposing those restrictions outside the capital. Finally, as ever with this disease, complacency is the enemy. Transmission patterns show that the virus is sensitive to every shift in behaviour and to each adjustment in official preventive measures. Paradoxically, progress lulls us into doing the one thing – relax – that we know puts that progress into reverse.