The Irish Times view on the Trump impeachment: a grand tragedy 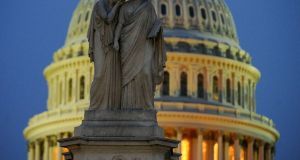 A statue representing “Grief” lays her covered face on the shoulder of the statue representing “History” on the Peace Monument near the US Capitol where the Senate impeachment trial of President Donald Trump is going on in Washington. Photograph: Mary F. Calvert/ Reuters

Donald Trump will forever carry the stain of having been impeached, but when the history of this era in US politics is written, it is the Republican Party that will be most tarnished by the process. There can no longer be any doubt: a once formidable party is now little more than a personal electoral vehicle for one man – a man who has abandoned the party’s orthodoxies, torn up its values and yet commands unquestioning loyalty not because colleagues feel any affinity for him but because they fear the consequences for their own careers of alienating his fervent supporters.

Just two Republican senators – Mitt Romney and Susan Collins – broke with their party in a vote on whether to hear from witnesses at the Senate trial, giving Republicans a 51-49 victory. At least it was consistent: a trial with a preordained outcome would have no witnesses. Republicans have no interest in hearing from John Bolton, the former national security adviser who, according to unchallenged leaks of his draft memoir, confirms one of the central claims behind the impeachment: that Trump withheld military aid to Ukraine until Kiev announced an investigation into the family of his Democratic rival Joe Biden. That vote means the trial will conclude as early as tomorrow with Trump’s acquittal.

That could unleash the worst of Trump: emboldened, bruised, out for revenge. At the same time, the largely undisputed facts of the Ukraine saga have undeniably reflected badly on the president. Yet the question of how the impeachment will affect Trump’s electoral prospects is less important than the broader issues: his abuse of power, his stranglehold on a craven Republican Party and the precedent created by this free pass given to a man who is plainly challenging the rule of law.

It was “a grand tragedy”, said Democratic Senate leader Chuck Schumer – a day when “the Senate turned away from truth and went along with a sham trial.” The real tragedy is that most serious-minded Republicans in the chamber no doubt agree, yet lack the moral courage to stand up and say so.