The Irish Times view on EU after Brexit: Weakened – but moving on 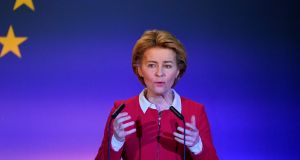 The UK, has lost a great deal in the self-inflicted wound that is Brexit. But the European Union loses too. Brexit leaves it weaker on the world stage, economically and politically. Internally it deprives it of a large part of its internal market and of a major contributor to its budget.

And it loses an important, albeit often contrary, agent for change. The UK was, to no small degree, the intellectual and political force that fashioned this hugely successful single market.

But Brexit is not the first nail in the coffin of the EU, a harbinger of its ultimate demise, as some suggest.

The union remains the largest producer and internal market in the world. It accounts for some 15.6 per cent of global imports and exports. The euro is the second currency in the world, while the EU is the largest global donor of development aid and is committed to leading world efforts to combat climate change by example and with its hard cash.

On Friday the EU institutions’ leaders, in marking Brexit, were putting their best foot forward with considerable hard-headed realism. No-one pretends that the UK’s departure will not harm the union, but the political will and unity manifest by the 27 members in the last three and half years makes facing up to the key, unavoidable challenges of the next decades – climate change and the digital revolution – entirely possible.

As commission president Ursula von der Leyen, citing Jean Monnet, put it: “I am not pessimistic. I am not optimistic. I’m determined.”

How genuine and deep that political will is will be tested immediately, however. At a summit on February 20th, leaders will be asked to put their money where their mouth is by signing up to a €1 trillion 2021-27 budget. On that will hinge not only important historic cohesion and farm programmmes but the €1 trillion to be leveraged from those budget commitments by the European Investment Bank on which the union’s flagship Green Deal will depend entirely.

German chancellor Angela Merkel calls Brexit “a wake-up call”. The erosion by populism of the legitimacy of the EU and the alienation of its citizens has to be addressed urgently, ostensibly by a two-year rolling conference on the future of Europe.

But that will be fruitless if it concentrates on institutional governance issues. As President Michael D Higgins suggested in a speech to foreign diplomats in Ireland last week, we need a broader discussion of what Europe is for, its political raison d’etre. His radical call for a re-examination of what he calls the “centrality of extensive individualism as a source of values” and his demand that Europe “place the solving of the inequality crisis at the heart of its endeavours” is an important start to that discussion.