Whatever the outcome, odds are that Spain’s politics will remain fractious 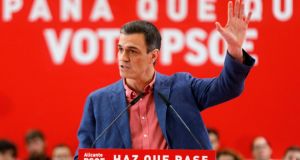 Spain is rightly proud of its historic and dramatic Holy Week processions which have deep significance for the country’s Catholic faithful and are passionately appreciated by many other citizens. But if these festivities can be seen as a symbol of the healing of wounds between sometimes deeply divided ideologies, they are not reflected in the tone and content of the current election campaign.

Sadly, Spain is now moving in the opposite direction with intemperate insults – sometimes recalling civil war rhetoric – drowning out substantive policy debates. Nor does the accelerating fragmentation of the political spectrum offer much prospect of the emergence of a stable government or some form of new consensus after next Sunday’s poll.

For decades, Spanish governments alternated between the conservative Partido Popular (PP) and the centre-left Socialist Party (PSOE). All that changed after the 2008 financial crisis which saw the emergence of the leftist Podemos. At the same time, Ciudadanos – a new centre-right group – initially offered a new conservativism without the endemic corruption and nostalgia for the Franco dictatorship that often tainted the PP.

Both newcomers might have injected a healthy new dynamism into Spanish politics but the political environment was enormously complicated by a troubling shift in Catalan nationalist politics – from satisfaction with autonomy under Spain’s decentralised system to a widely supported, though minority, demand for full independence.

The prolonged Catalan crisis, so poorly and opportunistically handled by Mariano Rajoy’s PP governments, in turn provoked a resurgence of aggressive Spanish nationalism. This ideology has been warmly embraced by the PP’s new leader, Pablo Casado. Perhaps more surprisingly, it has also been espoused by Ciudadanos, reducing the chances of the formation of a stable centrist government with the PSOE.

More recently, this Spanish nationalism has found fierce expression in Vox which bears some hallmarks of the old fascist right and rejects advances in women’s and minority rights. For the first time since the dictatorship, it will explicitly represent these views in the new parliament.

In contrast, the outgoing – and short-lived – minority government led by the PSOE’s Pedro Sánchez offers a programme of moderate centrist reform, qualified by its rejection of any referendum on Catalonia. Polls suggest the PSOE has most support. However problematically, Sánchez should be able to form a government with support from Podemos and Basque and Catalan nationalists. The three right-wing parties are much less likely to be able to find a majority formula.

Whatever the outcome, the odds are that Spain’s politics will remain fractious and unstable. That is bad news for the country and the EU.

1 Transmission of Covid-19 on flight into Ireland linked to 59 infections
2 Covid-19: Range of key indicators on spread of disease starting to decline
3 When Anthony Clare met ‘calculating, disturbing’ Jimmy Savile
4 Sacha Baron Cohen: ‘I had to ring the alarm bell and say democracy is in peril’
5 Two hundred Irish retailers for all your online Christmas shopping
Real news has value SUBSCRIBE