A grievous loss to Paris, France and the wider world 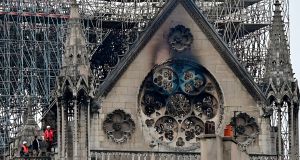 Inspectors are seen on the roof of the landmark Notre-Dame Cathedral in central Paris on Tuesday. Photograph: Lionel Bonaventure/Getty Images

Paris is a city in mourning. The catastrophic conflagration that engulfed Notre Dame cathedral, toppling its central spire and destroying its roof, represents not just a grievous loss to Paris and to France but to the wider world.

One of the best-known and most-loved historic buildings, a symbol of the French nation and especially of its capital, it attracted up to 14 million visitors a year, many of them awestruck by the soaring Gothic vaulted interior, with its array of stained glass windows, including three rose windows, one of which dates back to the 13th century.

These were badly damaged by the high temperature of the fire, which melted lead holding the glass in place, but many of the cathedral’s irreplaceable treasures were mercifully saved and taken to safety, even as it was raging. And tens of thousands of people, Parisians and tourists alike, took up vantage points along the river Seine, watching in disbelief and deep sorrow as the great cathedral burned while firefighters struggled to extinguish the blaze.

President Emmanuel Macron spoke for his fellow citizens when he described Notre Dame de Paris as “our history, our imagination, where we’ve lived all our great moments … the epicentre of our lives”, and pledged that it would be rebuilt. Even allowing for pledges of support, financial and otherwise from home and abroad, that monumental task is bound to take decades.

In the meantime, questions are being asked about how the fire started and why it took so long to bring under control. The fact that ongoing restoration work was under way on the roof area where it originated points to potentially careless work practices, possibly involving the use of blowtorches for the treatment of lead flashings.

Indeed, this is not the first time that a major historic building caught fire during the course of renovation works. Well-known examples include the “annus horribilis” conflagration that destroyed a substantial section of Windsor Castle, Queen Elizabeth’s favourite home, in 1992; the devastating fire that consumed all but the shell of Bank Buildings in Belfast last August, and the destruction of Brazil’s National Museum of Antiquities in Rio de Janeiro, with the loss of nearly all of its 20 million artefacts, just one month later. The latter had fallen into disrepair after chronic underfunding.

Fire personnel were rightly acknowledged for their courage in Paris. Yet it is not clear if the fire services had a contingency plan to deal effectively with a serious outbreak of fire at Notre Dame, or if provision was made to ensure that works involving the use of naked flames were being strictly supervised. Ireland’s fire authorities now need to reassure the public they are prepared to cope with such risks to the survival of major historic buildings, such as St Patrick’s Cathedral in Dublin. There are surely lessons to be learned from the tragic events in Paris on Monday.