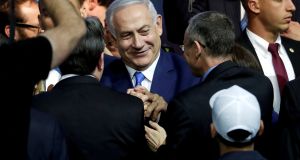 Binyamin Netanyahu has won the Israel general elections as leader of the Likud party, which is in much the best position to form a new coalition. It will be his fourth consecutive term in office and his fifth overall. His success in driving Israel to the right over the last 10 years on the basis of sustained fear of its enemies, ruthless strength in response, mobilisation of far-right West Bank settler parties and opportunist pursuit of regional and international advantage is further bolstered by economic prosperity. Israel is set to continue his path of domination over the Palestinians and rejection of a two-state settlement between the two peoples.

Netayahu’s seasoned political skills were amply in evidence during the campaign. By going to the polls early he heads off the Israeli attorney general’s decision that he should face trial on charges of fraud, bribery and breach of trust. Voters opted for security and continuity over those concerns. This was despite a strong but eventually unconvincing performance by the centrist Blue and White party led by former military chief Benny Gantz. His message of “anyone but Bibi” was outflanked by Netanyahu’s promise to extend Israeli sovereignty to West Bank settlements and attacks on the legal credentials of Arab Israeli parties.

These domestic strokes were accompanied by a brazen orchestration of political support from the Trump administration. Giant posters of the two men meeting in Washington covered Tel Aviv buildings, forming a backdrop to Trump’s tweet saying he is ready to recognise Israeli sovereignty over the Golan Heights. Meetings with Russian president Vladimir Putin and the new right-wing Brazilian president Jair Bolsonaro during the campaign reinforced the Netanyahu message that Israel is no longer isolated because of its failure to reach a Palestinian settlement but is regarded more and more as a guarantor of regional stability.

The challenge Israel faces given its presumed reinforced journey in this right wing direction under Netanyahu is how to square such policies with its international commitments to make peace with the Palestinians and find joint security with its neighbours. Creating facts on the ground with illegal Jewish settlements in the West Bank and then claiming Israeli sovereignty over them rejects a two-state agreement in favour of an apartheid-style Israel with dominant and subordinate Jewish and Palestinian inhabitants.

Such a power-driven approach is not sustainable in the long term. It will undermine the security of the Israeli state by creating a permanent rebellious underclass. That will gradually lose it legitimacy – not least among Jewish and non-Jewish sympathisers who so admire its history and many progressive achievements but want it to reach a just peace.