The Irish Times view on the legal system: access denied 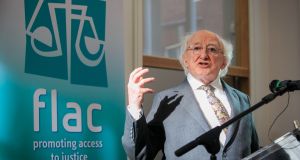 An effective legal system is a basic tenet of a functioning democracy, but no legal system can be effective unless every citizen has access to it. That points to a fundamental deficiency in our Republic.

Long delays and outdated procedures contribute to the problem by deterring people from taking legal action, but the real scandal is cost. Put simply, a great many people cannot afford to go to court because of the exorbitant amounts of money involved even for relatively straightforward cases. Efforts have been made to address this.

The Legal Aid Board was established in 1995 to help ensure that citizens of “insufficient means” would not be denied access to vital legal services. It has played an important role, especially given that society’s most marginalised are most at risk of encountering legal difficulties.

But there is huge pressure on legal-aid resources, with extremely long waiting times for an initial consulation with a solicitor. A State that invokes high principles such as equality and social justice has consistently failed to get to grips with this – in that respect, the lack of appetite in the current Government for taking on the vested interests in the legal profession that have most to lose from radical change is typical of a century-old pattern.

Barriers to justice damage the fabric of society, “entrenching and exacerbating inequality”, President Michael D Higgins said this week. He was speaking at an event to mark the 50th anniversary of the Free Legal Advice Centres (Flac), a non-profit network set up by four students in 1969 to provide legal advice to those who could not afford to pay for it. That was a supreme act of public good, and those who give of their time and expertise to staff Flac centres across the State uphold an honorable tradition. Demand for its services is huge; last year alone, the organisation provided legal information to 25,238 members of the public.

The scale of demand for Flac’s work is a poor reflection of our Republic and its failures. But the organisation itself is the very opposite, reminding us of the value and the potential of true civic-mindedness.