The Irish Times view on the Vatican and clerical child sex abuse: a lot said, much more to do 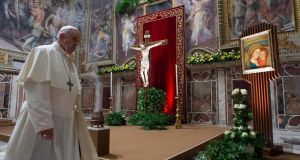 On Sunday, Pope Francis called for the eradication of child sex abuse “from the face of the earth”, saying “behind this there is Satan.” Yet concrete measures he called for to combat it have amounted to relatively little. Photograph: Handout/AFP/Getty Images

It was that other Pope, 18th century English poet Alexander Pope, who said: “words are like leaves; and where they most abound, much fruit of sense beneath is rarely found”. He might have been speaking about Popes John Paul II, Benedict XVI, and Francis, where language, practical measures, and clerical child sex abuse in the Catholic Church are concerned. Lots said, much to do.

Each Pope has spoken passionately about the evils of such abuse by priests and supervising bishops, but Rome’s actual response remains more rhetorical than real. In 2002, 18 years ago, Pope John Paul said “people need to know that there is no place in the priesthood and religious life for those who would harm the young”.

He was addressing American bishops, among them Cardinal Theodore McCarrick, who he appointed archbishop of Washington in 2000 and elevated to the College of Cardinals in 2001. Even then, rumours about the former cardinal’s abuses were widespread. Last week he was removed from the priesthood by Pope Francis.

Also in 2002 Pope John Paul continued to hold the late Fr Marcial Maciel, founder of the Legionaries of Christ, in highest esteem despite credible allegations of abuse against him in 1997 and an inexplicably discontinued Vatican inquiry in 1999. Maciel was removed from ministry by Pope Benedict in 2006.

Shortly before his election as pope in 2005, Benedict – then Cardinal Joseph Ratzinger – strongly condemned clerical child sex abuse, stating: “How much filth there is in the church”. But during his papacy this was not enough for him to co-operate with the Murphy commission when it investigated child abuse by priests in Dublin and Cloyne.

Last year Pope Francis denounced abuse allegations by survivors in Chile as “calumny”, before a later inquiry established the truth leading the Chilean hierarchy to offer resignations en masse. It would appear passionate abuse pronouncements by his two immediate predecessors had made little impression even on Pope Francis himself.

On Sunday he too found similar voice on clerical child sex abuse when he called for its eradication “from the face of the earth”, saying “behind this there is Satan”. Yet concrete measures he called for to combat it have amounted, to date, to no more than a handbook for bishops, a taskforce to guide them, and the introduction of child safeguarding measures in Vatican City. This is a paltry result following such great fuss.

One hope, however, is that the four-day meeting has helped to educate a wider church, not least in those parts of the world where discussion of clerical child abuse remains taboo. Such taboo is a danger to children as we know too well in Ireland.