The Irish Times view on the G7 summit: Divided they stand 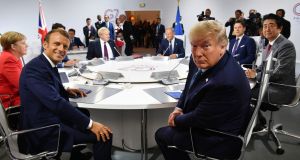 The G7 summit in Biarritz did at least confirm that, on the most pressing issues, US president Donald Trump has failed to drive a wedge between the rest of the group. Photograph: Jeff J Mitchell/PA Wire

Last year’s G7 summit in Quebec set a low bar for the annual gathering of heads of state from seven leading democracies.

If maintaining a public veneer of civility was the chief objective of this weekend’s summit in Biarritz, then that was largely achieved.

But the gathering once again highlighted the deep fissures that divide the group – or, more accurately, divide the US and the rest – on foreign policy, trade and tariffs.

Trump continued to call for Russia to be admitted to the club – which was the G8 until Russia’s illegal annexation of Crimea in 2014 resulted in its expulsion – but received short shrift from European Council president Donald Tusk, who said that was a non-starter.

US officials had briefed on Friday that the host, French president Emmanuel Macron, was filling the agenda with “niche” issues such as climate change and inequality when the focus should have been on economic growth and security.

Notwithstanding those divisions, which clearly undermine the G7’s ability to present a united front, the summit did at least confirm that, on the most pressing issues, Trump has failed to drive a wedge between the rest of the group. On tariffs and Iran, his isolation was striking, with even Boris Johnson, who will soon be pleading with the US for a reasonable trade deal, dissociating himself from Trump’s positions.

Having no doubt spent the Saturday evening dinner being implored to ease his trade war with China, the US president emerged on Sunday to say he was having second thoughts about his approach towards Beijing.

He conceded no such shift on Iran, but did state that he would not stand in the way of others – a reference to Macron – who wished to lead a joint approach with the aim of defusing tensions and opening new negotiations with Tehran.

With the world’s major industrialised countries as sharply divided as they are, such meagre advances count as progress.