The Irish Times view on the crisis over the Oireachtas golf outing: Stuck in the bunker 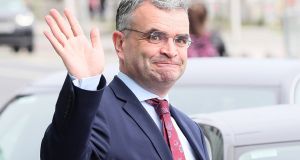 The political crisis generated by the Oireachtas Golf Society dinner is the last thing the country needs in the midst of the Covid-19 epidemic. The Government was struggling to provide coherent leadership even before the sensational disclosure that a raft of politicians, including a Minister, had taken part in an event that breached its latest guidelines and its task has now been made immeasurably more difficult, if not impossible.

The intense public anger that erupted when news of the event became known arose from the impression it created that there is one law for the powerful and influential in Irish society and another for everybody else.

The resignations of minister for agriculture Dara Calleary and leas-cathaoirleach of the Seanad Jerry Buttimer have not assuaged the public outrage, however. Attention has turned somewhat to European Commissioner Phil Hogan and newly appointed Supreme Court judge, Seamus Woulfe, the former attorney general, who also attended the event, although their actions appear to fall into a different category.

Neither man is directly answerable to the Government, but Opposition politicians have questioned their fitness to continue in their respective roles. While both certainly behaved irresponsibly there are grounds for proceeding cautiously in both cases.

Both men have made public apologies but have insisted that they attended the event in the belief that it would be in compliance with Government guidelines. Hogan maintains he attended the dinner on the understanding from the organisers that the appropriate guidelines would be observed. Clearly he should have reassessed the position when he saw the arrangement at the hotel and the fact that he did not do so was a serious mistake. His fate will ultimately be determined by Commission President Ursula von der Leyen.

The Government needs to take a long, hard look at itself. Its authority has been undermined, perhaps fatally, by key figures at a most delicate and critical juncture in this pandemic. At a time when the Irish public needs clear, coherent leadership, it is getting just the opposite.

The majority of people have endured a variety of severe restrictions on their way of living since March in the interests of society as a whole. That is what makes the flouting of them by elements of the political class so galling.

The Government’s difficulties in agreeing and communicating changes in its Covid-19 strategy have been exacerbated by this sorry affair. Its ability to promote a “We’re in this together” message has been perhaps fatally undermined. People are being confused and insulted by the behaviour of those who are supposed to be leading us out of this crisis.