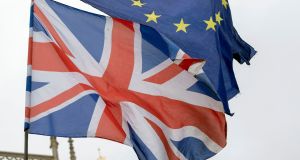 Union and EU flags flying outside the Palace of Westminster, London. The UK has expressed recent confidence that a deal can be done by the end of the month. Photograph: Steve Parsons/PA Wire

A seventh round of talks between the EU and UK over post-Brexit trade relations resumed on Tuesday evening over dinner between EU chief negotiator Michel Barnier and UK counterpart David Frost. The talks continue in Brussels until Friday.

The UK has recently expressed confidence that a deal can be done by the end of the month - Frost tweeted on Thursday: “Our assessment is that agreement can be reached in September and we will work to achieve this if we can.” - but sources in Brussels warn there is little sign of movement and that time is fast running out for a deal by the end of October to allow for ratification before the Brexit transition ends on December 31st.

That urgency was emphasised on Monday when the commission warned the City of London that there would not be time before January to set up close to 40 equivalency agreements to allow financial institutions to continue to have full access to EU financial markets. In the absence of agreement businesses will have to comply with a complex range of different national regimes.

The EU and UK remain divided over “level playing field” issues, notably ensuring state aid is not used to undermine competitiveness, fishing rights, and both the structure of an agreement and right of recourse to the Court of Justice of the EU (CJEU) over the interpretation of EU law in implementation disputes.

On state aid rules Brussels no longer insists that the UK should simply accept the Brussels regime if it wants access to EU markets, and the latter accepts that it will pay a price in tariffs for access to subsidised products. What is needed is a mechanism for assessing the competitive advantage particular new UK subisidies would give it and for setting tariffs that reflect these. London has, however, thus far refused to tell Brussels what the UK’s new subsidy regime will look like while Brussels wants the UK to sign up to a “shared philosophy” on future subsidy policy.

Diplomats say an agreement on fisheries may be possible but because of its political sensitivity this will be a last-minute deal. Access by EU boats to UK waters might yet be agreed subject to reduced quotas and in exchange for continued tariff-free access to EU markets by UK fishermen.

London now seems to be more willing to accept Brussels’ insistence that a deal must be done as a single package rather than as a series of many parallel agreements. But Britain still reportedly wants standalone agreements on aviation, fish and civil-nuclear co-operation.

There is still a belief - some say pious hope - in Dublin, as in Brussels, that the UK really does want an agreement by October to mitigate the damage being done by coronavirus. There is also frustration at the all-too-familiar mix of brinkmanship and indecision that still characterises London’s approach.