The Irish Times view on the Border: No-deal nightmare is a real risk 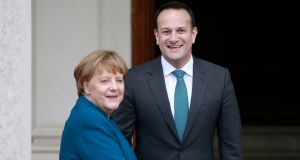 German chancellor Angela Merkel underlined after meeting Taoiseach Leo Varadkar that the EU would do all it can to avoid a hard Border. Photograph: Nick Bradshaw

It was clear from shortly after the Brexit vote that the Irish Border was likely to be a key issue in the talks and this was underlined as the British government set out its plan to leave the EU customs union and single market.

That uncertainty still hangs over the future of the Border, with a possible date for Brexit to happen just a week away, is testament to the rocky course of the talks and the inability of the UK to face up to the key choices.

In response to the UK’s initial Brexit plan, the EU, in consultation with the Irish Government, developed the plan for a backstop, an insurance policy that no matter what the outcome of future talks there would be no return to a hard Irish Border.

That plan was subsequently amended, on the request of the UK government. But the central point remains that to avoid the necessity for any Border checks, the North needs to remain in the same customs and regulatory regime for goods as the Republic.

A no-deal Brexit, however, means the backstop plan is not agreed, even if the EU and Ireland would press the UK to keep to its commitments here. Ireland is then faced with trying to avoid the return of a hard Border, while at the same time fulfilling its obligations to control the entry of goods into the EU single market.

There is nothing theoretical about this – it involves guarding against criminality and customs fraud and ensuring food and animal safety standards are maintained.

Faced with this, the Government has had to adjust its public stance. Where previously it said it would not countenance the return of a hard Border, now it is in discussions with the EU about how, in the event of a no-deal Brexit, it would minimise the checks that are needed and ensure as many as possible are conducted away from the Border itself.

German chancellor Angela Merkel underlined after meeting Taoiseach Leo Varadkar in Dublin yesterday that the EU would do all it could to avoid a hard Border, and mentioned her own experience of the Iron Curtain. We are as yet unclear as to where the compromises would be struck. And the Taoiseach will have been glad to hear Merkel’s assurances that everything possible will be done to avoid a no-deal Brexit. The reassurance from the EU that the backstop – or something like it – would come back into play if the UK returned to talks after a no-deal is also important.

As we head towards a defining week, there are signs that the UK, also, is trying to avoid a no-deal exit. However, despite neither side wanting it to happen, it remains a real risk. We must hope that, even late in the day,the no-deal nightmare can be avoided, along with its worrying implications for the Irish Border and peace and security on the island.