Looking at the Border from both sides now 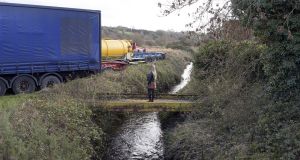 Field Notes from the Border #1 is the latest instalment of Reframing the Border, a series of border-themed, cross-border exhibitions and related events and programmes organised by the Gallery of Photography. The impetus is both the pending 100th anniversary of the establishment of the Border, and its renewed relevance in the light of Brexit and the backstop. This current show includes new works by Anthony Haughey – photographs, text and video – together with a further instalment of Kate Nolan’s Lacuna project (previously highlighted in a fine solo show) and Raymond B Newman’s film LOL 37 plus a series of photographs.

On one level, a political border is an abstraction projected onto a material and social reality. Without due consideration of those underlying realities, borders retain a simplistic, absolutist nature, a line drawn on a map. But the complications will not disappear. A reluctance or inability to acknowledge the real is surprisingly common in political rhetoric: in Margaret Thatcher’s frustration that they couldn’t just straighten the lines of the Border to make it manageable; in Donald Trump’s “build the wall” mantra; in the routine invocation of the magic of technological solutions during Brexit negotiations.

The title Field Notes is especially appropriate in that it underlines the fact that the work of all three artists acts as a corrective to the facile notion of borders as abstractions to be blithely imposed. In fact, each offers quite a different way of teasing out the complexity of the real. Which is not for a minute to say that their efforts will impinge on the wilful ignorance of those who don’t want to know.

Most space is given over to Anthony Haughey’s video and photographic installation, from which the show takes its title. A leisurely paced large-screen projection is flanked by related photographic prints. In exploring the fabric of the Border, Haughey has opted for one fitting technological solution: a drone. From this high vantage point, landscapes unfold below. A great deal of what we see is rather beautiful, as scrub and woodland expands across available spaces. There is also a great deal of infrastructure: roads and boundaries, power lines and, as gradually becomes apparent, a great deal of crumbling installations.

These range from big, functional corrugated sheds and similar structures, rusting and disintegrating, slowly being engulfed by vegetation, to the concrete slab of a helicopter landing pad in mountainous terrain. And there is a destroyed bridge, its massive oxidised steel beams angled into the dark water from both ends. Despite a certain architectural brutalism to, for example, the defensive metal framework of an abandoned British Army base, there is an almost elegiac quality to this record of a managed landscape being, for the most part, gradually reclaimed by plants and wildlife. There is the sense of an aftermath: this is all something that happened long ago.

At the same time, intimations of a more urgent, obdurate relevance to the present moment do become apparent. And, in images of the decommissioned bridge and the burnt-out interior of a bar, there is more than a hint of an abrasive, violent subtext. Haughey, who himself lives near the Border as it happens, has a long record of works on projects relating to borders, boundaries, territorial disputes and displaced populations, always in terms of the dire human problems and costs entailed. That includes work made in co-operation with asylum seekers in Ireland.

The exhibition includes a new short film made collaboratively with people living in a direct provision centre in Co Monaghan. It centres on a small group of individuals whose mode of recreation is to go on cycling trips into the surrounding countryside. Cycling, as one of them observes, offers a rare taste of freedom in a life of interminable waiting and constraint. They must, though, bear in mind a border that is not particularly visible: cross the line and their status is suddenly transformed. It is a straightforward work that makes its points very well.

Kate Nolan’s Lacuna project stems from her engagement with young people in small communities on both sides of the Border. Through dialogue she gains a sense of the personal, psychological and practical implications of altering the nature and status of the Border, entering into the imaginative and emotional lives of her subjects. In the process, her visualisations subtly deepen to encompass the concerns of young people generally, and are about life experiences and issues that are broadly applicable. Lacuna is developing into an intriguing, novelistic body of work.

Raymond B Newman’s project Unsettled Border is a reflective exploration of the Grand Orange Lodge of Ireland. His film LOL 37 focuses on the Altnaveigh Orange Lodge on the Armagh-Down border. Through interviews he delves into the history of the lodge, against a background of decline – a decline in numbers as fewer members struggle to maintain isolated buildings. What emerges from recollections and the evidence of the lodge’s furniture and fittings is a history of struggle and sacrifice. Untimely deaths, in wider and local conflicts, are a recurrent feature. A sense of identity may be heightened under pressure, but the numbers tell their own story, as does the fraying fabric of the building.

Field Notes From The Border, until April 7th galleryofphotography.ie
Both Newman and Nolan are involved in the Gallery of Photography artist-in-residence programme for the year. Haughey’s Field Notes from the Border #1 will  be at the Regional Cultural Centre, Letterkenny, from March 29th to May 18th, regionalculturalcentre.com. Nerve Visual, Derry, has been and is also involved in Reframing the Border.