The Irish Times view on Nato’s troubles: The limits of solidarity 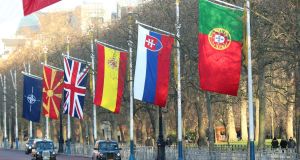 The Nato alliance is riven by internal tensions, its members openly at odds over how it operates and what it should stand for. Photograph: Yves Herman/Reuters

These days, the bar for success at a Nato summit is very low. The last gathering, in Brussels last year, ended in farce when Donald Trump mused out loud about pulling the United States out of the transatlantic alliance, berated fellow leaders for spending too little on defence and then walked out in the middle of a statement by German chancellor Angela Merkel. The two-day meeting that begins in London on Tuesday – officially not a summit but a celebration to mark Nato’s 70th birthday – has been choreographed to minimise the potential for such awkward moments. The time allocated to leaders’ discussions has been kept short, and officials have been playing down expectations.

That’s just as well. The alliance is riven by internal tensions, its members openly at odds over how it operates and what it should stand for. In a call last month for greater EU defence co-operation, French president Emmanuel Macron described Nato as “brain dead” and openly questioned whether article 5 – the mutual defence clause – could actually be relied on. Macron’s criticism was focused on Trump’s unilateral decision to withdraw troops from northern Syria, and Turkey’s subsequent military invasion in the region. But Macron’s comments rattled Poland and the Baltic states, left Merkel exasperated and prompted a schoolyard insult from Turkish president Recep Tayyip Erdogan, who wondered whether it was Macron who was brain-dead.

Disharmony within Nato is nothing new. Washington has long complained of Europeans’ comparatively low spending on defence. Members’ strategic priorities have often diverged. Charles de Gaulle withdrew France from the alliance’s military command structure in 1966 and it rejoined only in 2009. And the alliance has been making progress in some areas, notably counter-terrorism and cyber-security.

But the current splits are serious because they go to the heart of Nato’s role at a time when the strategic map of the world is changing rapidly. The Trump administration sees the alliance as a bulwark against China’s growing influence. In eastern and central Europe, it is a vital deterrent against Russian aggression, yet in Macron’s view its role is not to contain China or even Russia but to lead the fight against international terrorism.

The biggest internal threat the alliance faces comes not from the US but from Turkey, whose actions in Syria had the effect of undermining a military campaign (against Islamic State) that Nato states were actively involved in. Erdogan is now looking for Nato to classify as terrorists the Kurdish militias who defeated Islamic State (also known as Isis) on the battlefield alongside western allies. Meanwhile, he provokes his allies by testing a Nato non-compatible air defence system he recently bought from Russia. This week’s gathering would do well to remind Erdogan that solidarity goes both ways.