The Irish Times view on North-South cooperation on Covid-19: Too little coordination 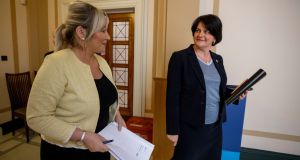 Northern Ireland’s health minister, Robin Swann, has criticised the Government in Dublin for its failure to keep the Executive in Belfast informed of its plan for easing lockdown restrictions. He has a point.

This has been a recurring problem. After First Minister Arlene Foster complained rather justifiably that she and her colleagues had learned of the Republic’s lockdown plans through the media, and amidst concerns about the divergent approaches to the pandemic on both sides of the Border, the authorities in Dublin and Belfast were eager to show determination to coordinate better.

We are in a dangerous moment, reopening society while the virus still circulates among us

In April a Memorandum of Understanding was agreed between North and South which recognised a “compelling case for strong co-operation, including information-sharing and, where appropriate, a common approach”. When the Government announced its accelerated roadmap last Friday, it said the Executive was informed in advance. But this appears to have been no more than a courtesy call.

The authorities in Northern Ireland made serious errors early on in the pandemic. Some, such as the failure to carry out community testing and set up a contact tracing system, were the result of a policy reliance on London, whose approach to the pandemic has been muddled and chaotic. But important strides have been made since then.

A rapprochement between Foster and Deputy First Minister Michelle O’Neill produced a useful model that reflected Northern Ireland’s own needs. The compromise was that the DUP accepted a plan closer to the Republic than to Britain, while Sinn Féin accepted the principle of a bespoke plan for the North. No deaths from coronavirus have been reported in the North in four days.

We are in a dangerous moment, reopening society while the virus still circulates among us. Radically differing approaches North and South would leave everyone on the island more vulnerable. If the Government means what it says about the importance of cross-Border coordination, then it should make a genuine effort to work with the Executive.