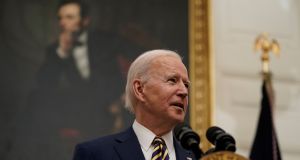 US President Joe Biden’s immediate decisions to rejoin the World Heath Organisation and the Paris climate accord are important indicators of his foreign policy. Photograph: EPA/Ken Cedeno

The strong mutual desire in Europe and the United States to reset transatlantic relations as the Biden administration takes over from Donald Trump sets the scene for a definite improvement. Relations became so bad that this is the easier part of the task. The more difficult one will recognise how much has changed. These two poles of the rich world now understand their economic interests, political values and geopolitical positioning no longer converge as before. A more equal transatlantic relationship is necessary for an effective reset.

In a series of initiatives following Biden’s victory European Union leaders set out a suite of policies that should reanimate their relations with the US. Charles Michel, president of the European Council, told the European Parliament they should include more multilateral cooperation, a joint effort to combat the Covid-19 epidemic, a common approach to tackling the climate emergency, negotiations on regulating the digital economy and fresh initiatives on security and defence cooperation. Trade and investment policies towards China, policies on Russia and the nuclear agreement with Iran are other prominent items.

Biden’s immediate decisions to rejoin the World Heath Organisation and the Paris climate accord are important indicators of his foreign policy, as are his discontinuation of the wall against immigration through Mexico and end to the travel ban on many Muslim countries. It will take longer to reengage with the Iran nuclear deal and balance his desire to renew US nuclear policy with Russia against his criticisms of its authoritarianism. China will be central to his foreign policy concerns over the next four years. Early indications of tension with the EU came from the warnings by incoming officials that the EU-China investment deal signed at the end of the year under Germany’s outgoing presidency is a bad deal conceding too much to Beijing. Those who defend the EU’s growing need for strategic autonomy say the deal is needed to rebalance the EU-US relationship. US policy towards NATO goes wider than the EU, encompassing the departing United Kingdom and wider transatlantic defence and security interests. Cybersecurity looms large here with China in mind.

Regulating taxation of multinational companies, including digital ones, is another large sphere of mutual interest. The Europeans are likely to discover a US freshly committed to engagement but determined to protect US interests. That accords too with Biden’s predominantly domestic agenda in coming years.

Success in that domestic agenda will allow him recast his international policies. If European leaders can help him create that balance across the span of their mutual interests and values it will ease the way towards a more equal transatlantic relationship.