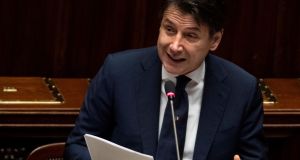 Giuseppe Conte on Monday angrily accused the Netherlands of practising “tax dumping” and Germany of exporting too much, both to the detriment of Italy. Photograph: Maurizio Brambatti/EPA

An apparent convergence in recent days between Commission president Ursula von der Leyen and German chancellor Angela Merkel over how the EU should fund pandemic recovery suggests today’s fourth video-conference summit may yet prove fruitful. At least the meeting starts with a broad consensus on the need for such a mechanism.

But the leaders face tough choices as coronavirus is reopening old economic divisions. Above all, the meeting will be a test of political will about whether there really is a common European purpose, whether any crisis is big enough to forge a common economic policy.

Crucially, on Monday, the chancellor made clear that Germany is ready to deliver more financial aid to EU partners. “Germany will participate in solidarity-based responses over and above what we already have with the €500 billion,” Merkel told journalists. On April 9th, the Eurogroup ministers agreed on an initial rescue package worth €540 billion.

Germany and the Netherlands have been strenuously resisting proposals for mutualising debt across the union by means of “corona bonds”, an idea that Italian prime minister Giuseppe Conte remains determined to press. On Monday he angrily accused the Netherlands of practising “tax dumping” and Germany of exporting too much, both to the detriment of Italy.

The leaders will be discussing what von der Leyen sees as the need for an additional €1 trillion rescue package, raised by the union on the markets in the context of its yet-to-be-agreed 2021-27 multi-annual budget (MFF). Merkel, although not talking about the MFF, has pointed to a legal means for doing so, a solidarity clause in the EU treaties.

And Spain presented its own proposal this week, advocating an MFF-related recovery fund of between €1 trillion and €1.5 trillion, financed through perpetual EU debt raised in the same way the budget is, and which would give grants to countries, rather than loans. As one sympathetic commentator described it, “a mutualisation of spending, rather than old quarrels over whether to mutualise debt”.

It would depend for repayments on the levying of new EU taxes. And each member state would only be responsible for repayments of its own share of the fund. It is, above all, not a question of taking over the debts of other countries, but it still faces opposition from the union’s frugal northerners.

France’s finance minister Bruno Le Maire has signalled a preference for a fund outside the MFF – indeed, the current MFF deadlock probably makes concurrent agreement on the budget and a recovery fund a challenge well beyond the leaders today. That reality must not be allowed to impede agreement. Too much is at stake.

1 Level 5 enforcement: Fines being considered for house parties and breaking 5km rule
2 Life under Level 5: What will the next six weeks look like for the State?
3 Level 5 Covid support bubbles: Everything you need to know
4 Much of what we think about Covid-19 is wrong. We need to change the conversation
5 Covid-19: State moves to Level 5 for six weeks with hopes of ‘meaningful’ Christmas celebrations
Real news has value SUBSCRIBE