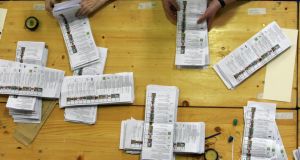 If compromise is reached at Westminster and the nature of Britain’s future relationship with the EU is clarified, all bets are off. But there is little sign this is likely. Photograph: Frank Miller

In other circumstances, the EU’s extension of the Brexit deadline would have generated a storm of demands from opposition parties for an immediate general election.

But because so many fundamental uncertainties persist about the UK’s medium term trajectory – and because of the effect on Ireland – an election remains off the table for now. If compromise is reached at Westminster and the nature of Britain’s future relationship with the EU is clarified, all bets are off. But there is little sign this is likely.

In any event, the parties here have plenty on their plates preparing for the local and EU Parliament elections on May 23rd. One of the first laws of political leadership is to keep your activists happy. A diversion of money and manpower to a general election campaign at this stage would be deeply resented by ambitious councillors and their supporters.

Party confidence is another consideration. The results of local elections are normally echoed by concomitant gains, or losses, in the following general election. As the party with the largest number of local authority members, Fianna Fáil anticipates further progress in May and would not wish to jeopardise that advantage.

If opinion polls are any guide, no significant changes in party support could be expected in a general election

Two months ago, as health and housing dominated political discourse, some Fianna Fáil backbenchers called for an end to their party’s confidence and supply agreement with Fine Gael. With Brexit looming, however, Micheál Martin faced down this thinly veiled threat to his leadership and his strategy was endorsed by the party’s ardfheis. It was agreed that another budget would be facilitated. Since then, little has changed.

Mrs May and her government have been granted an extension of time, until October 31st, to allow for passage of the withdrawal agreement with the EU. That concession came with conditions. If early agreement cannot be reached, European elections must be held on May 23rd. In the absence of elections, Britain will exit the EU without a deal on June 1st.

That prospect has encouraged the DUP to reach out to its electoral base in Northern Ireland by ostentatiously choosing candidates and preparing for the elections. The party may favour a hard Brexit over the backstop but it cannot be seen as promoting an early departure from the EU. The farming and business communities that stand to lose heavily in such an eventuality could turn nasty.

The results of the local and European elections, without doubt, will cause an outbreak of muscle flexing by successful parties. But if opinion polls are any guide, no significant changes in party support could be expected in a general election. In that case, an election would produce another hung Dáil and months of inter-party negotiations. As long as Brexit remains unresolved for even the medium term, it is hard to see how that could be in the national interest.