The Irish Times view on Orbán and the EPP: a missed opportunity 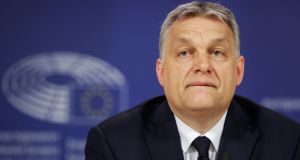 The EPP, in its statement, cites a number of admirable “European values” to which it insists it will now require Fidesz to demonstrate its commitment. Anyone who thinks Fidesz leader Viktor Orbán will ever promote these values has not been listening to a word he has said over the last 10 years. Photograph: Stephanie Lecocq/EPA

Wednesday’s decision by the European People’s Party (EPP) to suspend its Hungarian component, Fidesz, has been presented as a reassertion of the essential European values of pluralism, tolerance and respect for the rule of law.

Many EPP member parties had long found Fidesz wanting in its subscription to these values, accusing it of repeated infringements of constitutional principles and attacks on media freedom and academic independence, all backed by a deep-rooted and proudly proclaimed philosophy of illiberalism. Particularly galling to some sister parties was Fidesz’s recent poster campaign targeting European Commission president and fellow EPP member Jean-Claude Juncker, accusing him of conspiring with the Hungarian-born philanthropist George Soros to force immigration on Europe.

The EPP, an alliance of centre-right, Christian Democratic and conservative parties to which Fine Gael belongs, is the largest group in the European Parliament and perhaps likely to remain so after elections in May. Going into those elections it had found itself under pressure, from some of its own members and other European parties, to distance itself clearly from the kind of illiberal, populist and anti-European positions consistently adopted by Fidesz. This it has failed to do. Rather than the expulsion that many had called for, the group has announced that the party presidency and Fidesz “jointly agree” that the latter should suspend its membership until an “evaluation committee” of three senior Christian Democratic politicians can report on the issues. This report, the EPP statement adds, can be expected “in due course”.

Fidesz’s leader, the Hungarian prime minister Viktor Orbán, is already presenting the ruling as “a good decision” and “a compromise”, by which he clearly means a good first step on the road to victory. To this end he has announced that he will appoint his own “three wise men” to deal with the committee appointed by the party leadership. The EPP, in its statement, cites a number of admirable “European values” to which it insists it will now require Fidesz to demonstrate its commitment. Anyone who thinks Orbán will ever promote these values has not been listening to a word he has said over the last 10 years.

Whether through timidity or because electoral calculation leads it to think there may be more advantage to fishing close to the further shores of the right than nearer the centre, the EPP has missed a chance to mark itself off clearly from the politics of the European far right. It has justified its caution partly on the grounds that the party is “a family” and must act like one.

On this occasion, leniency looks like a mistake, with the delinquent child already walking away laughing up its sleeve.