If Netanyahu clings to power with the help of smaller right-wing allies next month, his looming trial may well foreshorten his term 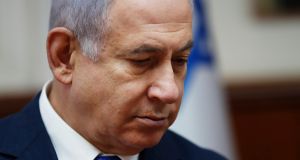 A looming indictment and the formation of a new a centrist party to oppose him have further jeopardised Binyamin Netanyahu’s chances of winning a fifth term as prime minister in elections next month. Photograph: Ronen Zvulun/EPA

When his predecessor, Ehud Olmert, faced a criminal indictment in 2009, Binyamin Netanyahu urged him to step down, remarking that a prime minister “up to his neck in investigations” could not effectively run Israel. A decade on, Netanyahu is refusing to follow his own advice.

The recommendation by Israeli attorney general Avichai Mandelblit that Netanyahu be indicted on charges of fraud, bribery and breach of trust in relation to three separate corruption cases fell like a bombshell in the closing stages of the country’s election campaign. Netanyahu denies the allegations against him and has refused to resign, but his legal problems will further weaken his chances of winning a fifth term as prime minister after the elections on April 9th.

Netanyahu’s defeat had become a serious prospect even before the attorney general’s intervention. His two chief opponents – former army chief of staff Benny Gantz and the centrist former TV presenter Yair Lapid – have joined forces under a new party, Blue and White, and hope to draw support from right-wing voters disaffected with the long-serving Netanyahu. The new grouping is out-polling the prime minister’s Likud, prompting Netanyahu to ratchet up his populist attacks on rivals real and imagined – notably the media, Arabs and a leftist deep state he claims is plotting against him. His response, as usual, is to tack hard to the right. Most alarmingly, he pressured his allies in Jewish Home, a religious-nationalist party, to include in its candidate list representatives of the racist Jewish Power party – regarded by many as the offshoot of a party the US State Department designated a terrorist organisation.

Netanyahu is not out yet. Likud was trailing in the weeks leading up to the 2015 election but shored up its vote in the closing stages of the campaign. Even if Blue and White emerge on top, the new party will need a spectacular result to oust Netanyahu’s right-religious coalition.

Yet even if Netanyahu clings to power with the help of smaller right-wing allies next month, his looming trial may well foreshorten his term.