The Irish Times view on Cyclone Idai: Swept away 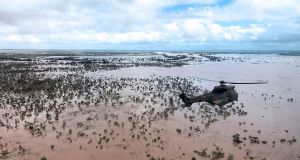 It may be months before we know the full scale of the destruction wrought by the deadly cyclone that hit southeast Africa last week, but already it’s clear that the region has suffered one of its worst natural disasters in living memory. Drone footage from parts of Mozambique worst affected by Cyclone Idai show entire towns submerged – fields vanished, homes swept away, bridges collapsed, communities marooned.

The cyclone hit Mozambique’s port city of Beira with winds of up to 170 kph (105 mph) last Thursday, then moved inland to Zimbabwe and Malawi, flattening buildings and leaving an area of 394 sq km (152 sq miles) flooded, according to the European Union’s Earth Observation Programme.

Up to 90 per cent of Beira, which is home to 500,000 people, has been “completely destroyed”, the International Federation of Red Cross and Red Crescent Societies reported. At least 200 people have died in Mozambique and 98 in Zimbabwe, but the death toll is likely to rise as rescuers are still finding bodies.

Mozambican President Filipe Nyusi has said the eventual death toll from the cyclone and ensuing floods could rise to more than 1,000, which would make it one of the worst weather-related disasters ever in the southern hemisphere.

The affected region is one of the poorest in the world, and one of the places least equipped to deal with a calamity on this scale. Roads and bridges are closed, and many areas have no power, shutting down communications and airports that could be used to bring in supplies. Aid agencies have struggled to gain access to Beira, let alone begin to assess the scale of the destruction in more remote parts of the interior.

The UN estimates that more than 2.6 million people are in need of immediate help. Reaching them and providing them with food and shelter will require a huge international effort. The EU has pledged initial emergency aid of €3.5 million to the three affected countries for shelters, hygiene, sanitation and healthcare. Individual states must also step up and show their solidarity.