The Irish Times view on the New Zealand mosque murders: the world after Christchurch

The extreme right has long used the internet to organise and exchange ideas, but the Christchurch murders marked a shocking low in the choreography of terror 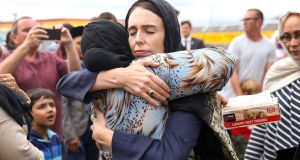 As New Zealand prepares for the burials of the 50 people murdered last Friday at two Christchurch mosques, the country is grappling with the questions raised by the worst mass shooting in its modern history. Prime minister Jacinda Ardern has responded to the terrorist attack by a right-wing conspiracy theorist by ordering an inquiry into whether government agencies could have prevented it. She has also initiated an overhaul of New Zealand’s relatively lax gun laws and has pledged to announce reforms within 10 days. It’s essential that happens. But any meaningful reflection on the horrific slaughter in Christchurch must include two far broader questions.

Fast, unmediated, unfiltered communication tools are being used to promote some of the worst atrocities of our age

The first concerns the political climate. Populist far-right politicians across the world have lined up to offer the standard “thoughts and prayers” in the wake of the massacre, but it’s plain to see that white supremacists feel empowered by the violence, intolerance and hatred that those same politicians have injected into mainstream western political discourse.

An EU member state, Hungary, is led by a man whose brand of “illiberal democracy” is characterised chiefly by its demonisation of Muslims and other minorities. In the White House is a president who lauded the “fine people” among white supremacists who gathered in Charlottesville in 2017. Islamophobia and bigotry have real consequences. Politicians who trade in violent, hateful rhetoric cannot get a free pass by offering their condolences after every murder committed by someone acting in the name of those same vile ideas.

The second question is for the tech giants . The extreme right has long used the internet to organise and exchange ideas, but the Christchurch murders marked a shocking low in the choreography of terror. Brenton Harrison Tarrant, the 28-year-old suspect in the mosque murders, planned the attack for maximum virality.

A 17-minute live-stream via Facebook was viewed in real time by thousands of people, and although Facebook and other platforms like YouTube and Twitter scrambled to take down the recording, copies sped around the globe too quickly for their spread to be halted. Having long denied responsibilty for user content, social media platforms have slowly started to take more seriously the need to filter and moderate extreme and illegal material. But the instantaneous widespread dissemination of the Christchurch footage shows the limits of their methods.

Ultimately, Big Tech will have to confront the glaringly obvious: the technologies that have made them so successful – fast, unmediated and unfiltered communication tools – are also being used to promote some of the worst atrocities of our age. Adapting those technologies will inevitably hurt the bottom line. But the ethical case for doing so is inarguable.