The Irish Times view on the O’Rahilly’s house: demolishing our past

The motion to protect the building was on Dublin city council’s monthly agenda for more than a year, which speaks volumes about the way local authorities do their business 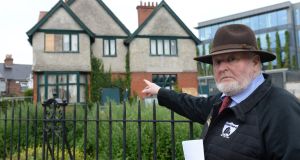 There was widespread dismay this week over the demolition of the home of 1916 Rising leader The O’Rahilly, just two weeks after Dublin city councillors voted for its addition to the Record of Protected Structures. It was unlikely the councillors’ vote was ever going to save the house, given it was taken after permission for demolition was granted by An Bord Pleanála, but the situation could have been very different if action had been taken sooner.

The motion to protect the O’Rahilly house was on the council’s monthly agenda for more than a year, which speaks volumes about the way local authorities do their business. However, the writing was on the wall for this house quite some time earlier. It was once part of a row of three houses built in 1907 for the World’s Fair Irish International Exhibition to promote Irish industry. The O’Rahilly was the first occupant of number 40.

In 2016 the McSharry and Kennedy families, who own the Herbert Park Hotel, bought numbers 36 and 38 and two years later were granted permission for their demolition as part of an apartment and aparthotel development. However, the same year they bought number 40 which allowed them to revise, and expand their plans. Given they already had permission to knock 36 and 38, which they did at the start of this year, number 40 was on shaky ground. Leaving aside number 40’s historical associations, there was an argument for preserving all three Edwardian villas, which were designed as a set piece. It would have strengthened the case for the protection of the O’Rahilly house.

It is notable that the Department of Culture and Heritage in its submission to the board opposed the demolition, not because of O’Rahilly, but because it did not support the removal of the three houses, “as it removes 20th century typologies that are fully viable and their loss may be regarded as undermining local character and identity” of Ballsbridge”. The reuse of “existing assets and their craftsmanship”, was a central Government policy “to combat climate change and loss of cultural significance/sense of place” it said. Sadly, that view appears to have carried little weight.