The Irish Times view on Israel’s election: Netanyahu lost – but nobody won

As things stand, the only way of avoiding political paralysis is for the long-serving prime minister to leave the stage 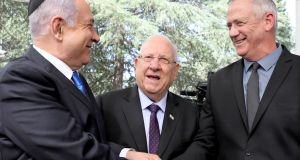 Binyamin Netanyahu lost, but nobody seems to have won. That’s the only firm conclusion to be drawn from Israel’s second election in five months, which has left the country’s politics even more firmly deadlocked than before voters went to the polls on Tuesday.

With almost all votes counted, Netanyahu’s Likud trailed the Blue and White Party, led by the former army chief Benny Gantz, by two seats in the 120-member Knesset. The prime minister’s right-wing bloc has 55 seats, far short of a majority. But Gantz, even though his party emerged as the biggest single bloc, also lacks a clear route to power.

As expected, the position of kingmaker is occupied by Avigdor Lieberman, a right-wing security hawk and staunch secularist whose refusal to prop up a Netanyahu administration earlier this year in a dispute over privileges accorded to the ultraorthodox – a key constituency for Netanyahu – blocked a return to office for Israel’s longest serving prime minister.

Netanyahu acknowledged on Thursday that he would be unable to form a right-wing coalition when he called on Gantz to sit down for discussions on a unity government. That was no doubt partly a tactical move to avoid all the blame for a third election. Lieberman himself has called for a secular unity government, but Blue and White’s leadership has made clear that they would not consider coalescing with Likud while Netanyahu remained as leader.

Unless Lieberman shifts his position, then, the only way Israel can avoid ongoing political paralysis is for Netanyahu to leave the stage

Perhaps the most important breakthrough was that of the Joint List of Arab parties, whose 13 seats lifted it to third place and suggested that Netanyahu’s shameful attempts to demonise Arab Israelis during the campaign backfired spectacularly. The Joint List is unlikely to join a government, but it could conceivably become the lead party of opposition.

All eyes are now on President Reuven Rivlin. If he invites Gantz to lead coalition negotiations, the former head of the military could string out the process beyond October 3rd – the date on which the attorney general is due to announce whether Netanyahu is to be indicted on corruption charges. So far, Likud has held firm in its support for Netanyahu. But his legal troubles, his increasingly desperate attempts to cling to power and the evaporation of his aura of invincibility in recent months have left Netanyahu a diminished figure. When asked about Netanhayu’s position this week, his close ally Donald Trump pointedly remarked that the US’s relationship was with the state of Israel, not any one individual.

Unless Lieberman shifts his position, then, the only way Israel can avoid ongoing political paralysis is for Netanyahu to leave the stage. That would be good for Israel, whose reputation and democracy he is damaging further with every week he remains in office.