The Irish Times view on beef dispute: Give the deal a chance 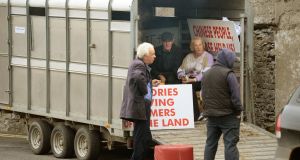 The difficulty in reaching an agreement to try to settle the beef dispute – and the decision of many farmers to continue their protests despite detailed proposals – reflects the challenging situation facing the sector. The row has been about how returns are divided up between farmers and processors, but the real problem is the current scale of these returns. At current prices, beef farming is a loss-making activity for most farmers, who must rely more than ever on direct farm payments from the EU and work in other sectors to earn an income.

Continuing the protests will not solve this problem. Farmers should give the deal, approved by all the main farm organisations and the Beef Plan Movement, a chance. It contains real improvements for them. It does not include a higher base price for their cattle – competition rules meant this could not be negotiated. But the concept of farmers getting together in producer groups could give them more bargaining power.

Farmers are right to call for more transparency and for a recognition that rules about the age of cattle qualifying for bonus payments were outdated. But the fundamental problem lies in the price available in the marketplace. And with 90 per cent of beef exported – mainly to the UK and continental EU markets – there is not a lot we can do about this.

At this stage the protests are threatening large parts of the industry, with thousands of employees temporarily laid off. Farmers need to think not only of their own livelihoods here, but also of others – and of an entire industry on which, whatever the current problems, they depend.

This is made all the more concerning by the imminent threat of a no-deal Brexit, which – overnight – would threaten to make Irish beef uncompetitive in our main export market. And meanwhile, climate concerns and calls to cut the beef herd are another vital issue. Farmers are right to be worried and to demand involvement from the Government and the EU in providing some clarity about their future. But continuing the current protests serves no purpose.