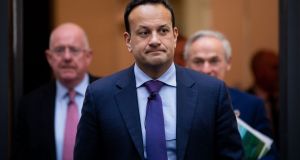 The reputation of Taoiseach Leo Varadkar’s Government for economic competence has been tarnished by ongoing questions about the cost of two infrastructural projects. Photograph: Tom Honan

The Government’s reputation for economic competence has been tarnished by ongoing questions about the cost of two of the biggest infrastructural projects in the history of the State, the National Children’s Hospital and the National Broadband Plan. Fine Gael’s disappointing performance in the local elections was attributed, at least in part, to public disquiet at the failure to get to grips with the cost of both projects which undermined its claim to be a prudent guardian of the public finances.

With a general election getting ever closer, the Government hoped to put both controversies behind it and put the focus on economic growth, falling unemployment and rising living standards.

However, the controversies over the infrastructural projects will simply not go away and in recent days both have been back in the news. On the hospital issue, The Irish Times revealed a letter from the Health Service Executive (HSE) warning the Government that it will be almost impossible to deliver planned investments in new healthcare facilities in the coming years because of the cost overruns at the children’s hospital.

In relation to the broadband controversy telecommunications company Eir, which pulled out of the bidding process, told an Oireachtas committee it could deliver the plan for around €1 billion. Chief executive Carolan Lennon claimed it could roll out high speed broadband to 540,000 homes, farms and businesses for just a third of the sum the State has agreed to invest in the project, and a fifth of the estimated final cost.

It should be said that both the HSE and Eir may have self-interested reasons for their interventions. The HSE has suffered widespread criticism for its continuing inability to get the massive health budget under control and the children’s hospital project is a convenient diversion. As for the belated intervention by Eir, there are suspicions that its turnaround on broadband could be motivated by a desire to have critical elements of the project revised to its commercial advantage.

Nonetheless, there is no escaping the fact that the two projects are going to cost the taxpayer far more than envisaged when both were in the planning stage and the Government has to accept responsibility for not keeping a much tighter grip on their development.

At this stage there is no going back on the Children’s Hospital. There have been far too many delays already. But a rigorous analysis is required to establish just how the cost got so much out of control so that lessons can be learned for the future.

On broadband, Taoiseach Leo Varadkar has said he wants to establish if Eir’s claim stacks up. The sooner that can be done the better. The people of rural Ireland are entitled to fast, reliable internet access, delivered as cost effectively as possible. Decisions about how that is achieved should not suffer further delay.