The Irish Times view on the Council of Europe: keeping Russia in the tent 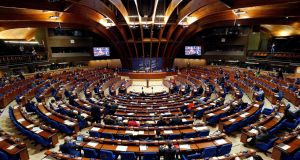 On Tuesday, five years after Russia was stripped of its voting rights at the council’s parliamentary assembly over the illegal annexation of Crimea, member states voted to readmit Russia’s representatives as full voting members. Photograph: Vincent Kessler/Reuters

The dispute within the Council of Europe over Russia’s membership of the organisation has exposed a deep fault line. On Tuesday, five years after Russia was stripped of its voting rights at the council’s parliamentary assembly over the annexation of Crimea, member states voted to readmit Moscow’s representatives as full voting members. Although the proposal was decisively carried, by 118 votes to 62 and with 10 abstentions, the debate that preceded it was bitter and acrimonious.

Russia had threatened to withdraw from the 47-state council, which oversees the 1949 human rights convention and European Court of Human Rights. Germany, France and the Netherlands were adamant that that must be avoided, arguing it was vital to maintain Russia in the fold. Secretary general Thorbjorn Jagland had warned that losing Moscow would create “a new dividing line” on the continent.

But a clutch of former Soviet states, led by Ukraine, had resisted extending an olive branch to Moscow, seeing the move as a capitulation to a Kremlin that had done nothing to change its behaviour since 2014.

The Council of Europe had faced a dilemma that international rights groups frequently wrestle with: is it better to shun autocrats or to keep them in the tent in the hope of influencing their behaviour? Tuesday’s move is exactly what Ukraine says it is: a unilateral climbdown for a state whose behaviour in Crimea and elsewhere is clearly incompatible with the ideals of the institution. But forcing Russia out would also have come at a cost for Russian citizens, who would have lost the right to appeal to the European court to seek to vindicate their human rights, win compensation or oblige the Russian government to change any contravening laws or regulations.

With the decision now taken, it’s important that the wider European community continues to make clear its willingness to use other levers at its disposal, including sanctions and travel bans, in response to Russian aggression in Crimea and elsewhere.

1 Child (4) died of viral infection following nap at Cork creche
2 Miriam Lord: Does anyone care if Leo smoked or snorted?
3 Man tested for symptoms linked to coronavirus in Belfast
4 A vegetarian and a non-drinker visit Ireland: here’s their verdict
5 Fintan O’Toole: Historians will not believe sheer ignorance of Brexit supporters
Real news has value SUBSCRIBE