The Irish Times view on the US peace plan: an absurd prospectus 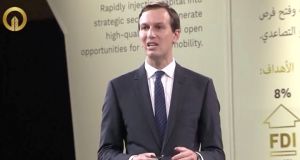 White House senior adviser Jared Kushner gives a speech at the opening of the “Peace to Prosperity” conference in Manama, Bahrain, on Tuesday. Photograph: Reuters

The first instalment of the Trump administration’s “deal of the century” on the Israeli-Palestinian conflict has been greeted with derision, and deservedly so. Few serious analysts had high expectations for the delayed roadmap overseen by President Trump’s son-in-law Jared Kushner, but the economic plan, revealed in a glossy 40-page brochure that resembles a property prospectus, is an absurd piece of work, rich in contradictions and lacking even basic insight into the nature of the conflict.

The plan, titled “Peace to Prosperity”, focuses entirely on the economic rejuvenation of the Palestinian territories. Kushner presents this as a new idea, but it dates back as far as the Reagan administration. In the hands of smarter US administrations with better regional relationships than this one, the idea has never gone anywhere. The main reason is a conceptual flaw: the biggest obstacles to economic advancement in the territories are the occupation of the West Bank and the blockade of Gaza. In other words, the political and the economic are indivisible. Yet Kushner’s plan is completely silent on those issues. He argues that the political component will be presented at a later date, but given that the Palestinians are certain to dismiss it and that his re-election campaign is under way, some suspect Trump may never table those proposals.

The US plan was debated at a two-day “workshop” in Bahrain this week. But the Palestinian political and business leadership boycotted the event and participating Arab states sent mainly low-ranking officials. Kushner hopes to raise $50 billion for the plan, but the US itself does not intend to stump up any money – instead, it hopes the Gulf states and private investors will foot the bill. Ironically, the US is calling for such investment at a time when it is aggressively cutting funding to Palestinians, notably by slashing its payments to UNRWA, the United Nations agency that helps provide vital services to Palestinian refugees. Kushner’s document calls for up to $900 million to build hospitals in the Palestinian territories; last year the US cut $25 million in aid to six hospitals in East Jerusalem. (The brochure itself includes photos of programmes cancelled after the US withdrew aid.)

The Trump administration appears to believe that Palestinians can be persuaded to trade rights for cash. In fairness, it does not even try to conceal this. Its previous decisions – the unilateral recognition of Jerusalem as Israel’s capital, recognition of Israel’s annexation of the Golan Heights and the closure of the Palestinian diplomatic office in Washington – show that it sees the key political questions from one side only. With those moves, the Trump White House demonstrated it had no serious intention to try and broker a settlement. With Kushner’s plan, we see that it has no ideas on how to resolve the conflict either.