The Irish Times view on Istanbul’s election: a historic rebuke for Erdogan 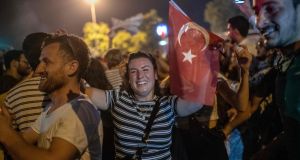 ‘Whoever wins Istanbul wins Turkey, ” Recep Tayyip Erdogan once said. How he must hope he is wrong. In perhaps the most significant setback he has suffered in politics, Turkey’s president has lost control of the country’s biggest city, a result that blows apart the myth of his own invincibility and emboldens an opposition convinced it has finally struck on an electoral formula that could leave Erdogan himself vulnerable.

Sunday’s election for the Istanbul mayoralty was a rerun of the vote held in March, when Ekrem Imamoglu of the opposition Republican People’s Party (CHP) narrowly defeated Binali Yildirim, a former prime minister representing Erdogan’s Justice and Development Party (AKP). The ruling party challenged the result and leaned on the national election authority to order a repeat. That turned out to be one of Erdogan’s biggest miscalculations. On Sunday, Imamoglu’s margin of victory increased from 13,000 votes to 800,000, his support apparently boosted by widespread anger over Erdogan’s cynical gambit and – more worrying for the president – even some votes from disenchanted AKP voters.

Thanks to a constitutional referendum in 2017, Erdogan enjoys vast executive powers and has used those powers assiduously to make life difficult for his opponents

The cost of the defeat is very real. Control of Istanbul’s $4 billion municipal budget gave the AKP unrivalled patronage networks that it used to build its support in the city. With Sunday’s result, the opposition is now ascendant in all of Turkey’s major metropolitan cities, giving it an important platform to build a serious challenge to Erdogan’s dominance. But the symbolism of losing Istanbul, and in such humiliating circumstances, is even more damaging to Erdogan.

As mayor of Istanbul 25 years ago, Erdogan built a reputation as a pragmatic fixer and used that position as a launch pad for his career. In Imamoglu, he now has a charismatic rival in that key position – a rival who has managed to unify disparate opposition groups including secularists, Kurds and even some Islamists, around an optimistic brand of politics that clearly resonates in a population worn down by Erdogan’s purges and the economic decline taking place on his watch.

For now, Erdogan is clearly still in the driving seat. Thanks to a constitutional referendum in 2017, he enjoys vast executive powers and has used those powers assiduously to make life difficult for his opponents and Turkey’s shrinking free press. He does not face a national election until 2023.

Imamoglu faces the most formidable and ruthless politician in Erdogan, who could yet seek to contain the younger man’s rise by squeezing his budgets or limiting his autonomy. But the message from Istanbul is unmistakable nonetheless: with the right candidate, in the right circumstances, Erdogan is beatable. For an opposition that has had little to cheer in the six years since the Gezi Park protests in Istanbul in 2013, that’s an electrifying thought.

1 Six forgotten Irish women who achieved the extraordinary
2 Mother of McGinley siblings arrested on suspicion of murder
3 Mother of McGinley children found dead last week arrested
4 Billie Eilish: Her stance that her body is not public property is still a radical act
5 ‘In Ballyhaunis there were Arab people all around me’
Real news has value SUBSCRIBE